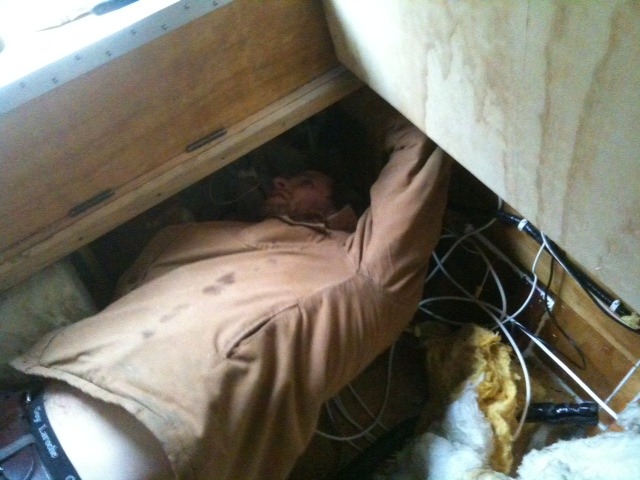 I was really glad to have the help of the communitiy members who I live with over the past couple days. I had no water for 4 days because of the freezing weather which meant I made numerous runs into Chris and Julie’s house for showers and to bring pots of water back to the trailer for washing dishes.

On top of that, the gear shift on my truck completely seized up Thursday night and the clutch stopped working. I was going to bring it into a mechanic’s shop because I know almost zilch about vehicle mechanics, but it wouldn’t even get me up the street. Stranded and wondering if paying for a tow-truck would be worth it, I pretty much thought my dear old gifted truck had finally kicked it. And then Ryan took a look and discovered low clutch fluid. Borrowing Mel’s car, I ran to the gas station, spent $4.50 on Dot 3 (now I know what that is :), and Ryan and I filled it up. He figured the clutch would need bleeding, which he was generously going to attempt himself, but it turns out just filling it up did the trick. So glad I didn’t pay for a tow truck or for a mechanic to do that (pretty sure my bill would have been more than $4.50) and VERY thankful for Ryan and his quick offer to see if he could figure out the problem.

And then on top of that, when the weather warmed up yesterday and my running water returned (normally a really good thing), I was surprised to find that my water pressure was still too low to shower in. Getting worried, I started poking around a bit this morning and discovered a waterfall pouring out from under the back area of my trailer. I ran back inside, pulled out all of my cushions around my back table, lifted up the bench seats and discovered a major leak in one of the plumbing lines. Thankfully the bench seats contained the water securely (no overflowing into the rest of my trailer) and thankfully there is some kind of leak or drain in the back of my trailer – otherwise, there would have been way more of a mess to clean up. I turned off the water source and as the water drained out from who knows where, I assessed the situation. I thought I might be able to fix it on my own, but the pipe needing to be removed and replaced was too far up in the wall for me to easily get to it. This time Chris came to the rescue. We pulled out insulation and he got right down into the base of the bench seats, reached up the wall, and was able to remove the pipe. (That’s him in the iPhone photo I shot while holding up the bench seat for him). Pipe removed, I ran to the hardware store only to find out that my oldschool RV pipes aren’t made anymore, but the hardware guys very helpfully put together a DIY pipe for me that would do the trick. Chris installed it for me back on the farm and now I have full-pressured, non-pipe-leaking water to shower in. Yay! Total amount I spent on the new pipe bits and a caulking gun so I can apply silicone sealant to an exterior area where we had to move some stuff to fix the pipe: $25.00.

All in all, a fixed truck and trailer pipe, DIY-but-not-by-yourself-style, for $30.00. Pretty darn awesome. Between DIY youtube videos and handy friends who are generous with their time and abilities, getting stuff fixed at home for cheap is seriously wonderful. And you always learn something new.

Thanks guys! Cases of thank you beer coming soon :)