Since we’re 16 months into what I originally called the ‘Farm for a Year’ project, I figure it’s about time I graduate this blog (and project) to a new title: Farm For Life.

I chose this name for a few reasons:

I’ve registered a new domain name for this website. The new address is www.thefarmforlifeproject.com, but for the ease of regular visitors, the original www.farmforayear.com will continue to bring you here as well.

PS – I’m exploring ideas for a different website design that will be better suited to hold more of the information I want to make available here. Hope you’re not too attached to this look. Stay tuned! 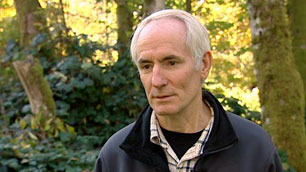 Michael Sather is the MLA for Maple Ridge – Pitt Meadows and a great advocate for environmental conservation and local farms. Michael has been out to visit our farm to learn more about what we’re doing and he recently made a statement about our efforts, linking it to the need for more young people to take on farming roles in our communities, in the May 4th, 2011 debate of the BC Legislative Assembly.

You can watch Michael making his statement about Farm for a Year in this Hansard video (go to the 14:00 minute mark) and you can read it in this section of the report of the debate (scroll down a little to see his statement). I’ve also reprinted it below. (PS – I’m not actually Chantalle’s sister, but living together on the farm pretty much makes us family :).

FARM FOR A YEAR PROJECT

M. Sather: The farming industry is comprised of an aging population these days, with the average age of a farmer in Canada being 60. There is a crucial need for young people to enter the field as more farmers are set to retire, and the opportunities to learn from a seasoned grower are diminishing. In an era of climate change, peak oil and rising prices it is necessary to localize food production, and young farmers will play a key role in this transition. That is why it is a breath of fresh air to know there are young people who have taken a risk and begun to farm.

A group of five people, average age 30, have started a project called Farm for a Year. Chris and Julie Moerman, Matt and Chantalle Moerman, and Chantalle’s sister Jocelyn Durston are working hard to convert 2&frac12; acres in Maple Ridge to the status of an active farm. These young people join many other landowners in Maple Ridge who are converting their acreages into productive farms.

This picturesque property is being operated on the principles of permaculture for healthy, pesticide-free produce. On their farm you will find a chicken tractor,
a mobile chicken pen that allows the chickens to fertilize different beds. The farmers have a special interest in heritage and endangered chickens, such as the Russian Orloff and Chinese Silkie.

Because of its name, Farm for a Year may sound like a fleeting attempt at a hobby farm, but Chris assured me their family is invested in the property for years to come. Judging by their long-term projects — including planting fruit trees, evacuating a pond for fish and focusing on specialty crops such as garlic and mushrooms — they will be getting their hands dirty for a while.

One can only imagine the active rural childhoods that baby cousins Kai and Canaan will be fortunate enough to have. Don’t hesitate to check out their colourful website at www.farmforayear.com.

Michael, thank you so much for your ongoing efforts in the conservation of the environment and agriculture! Your work is so important and we are grateful that you are representing  and supporting groups like ours that are trying to make a positive impact on the enivronment and our community. 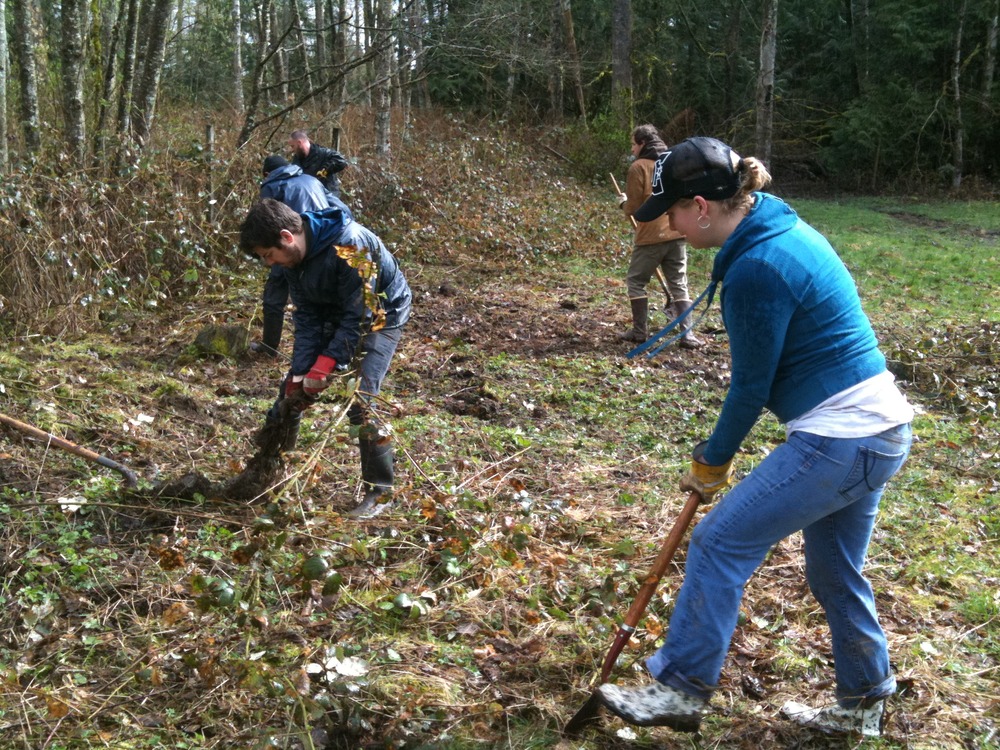 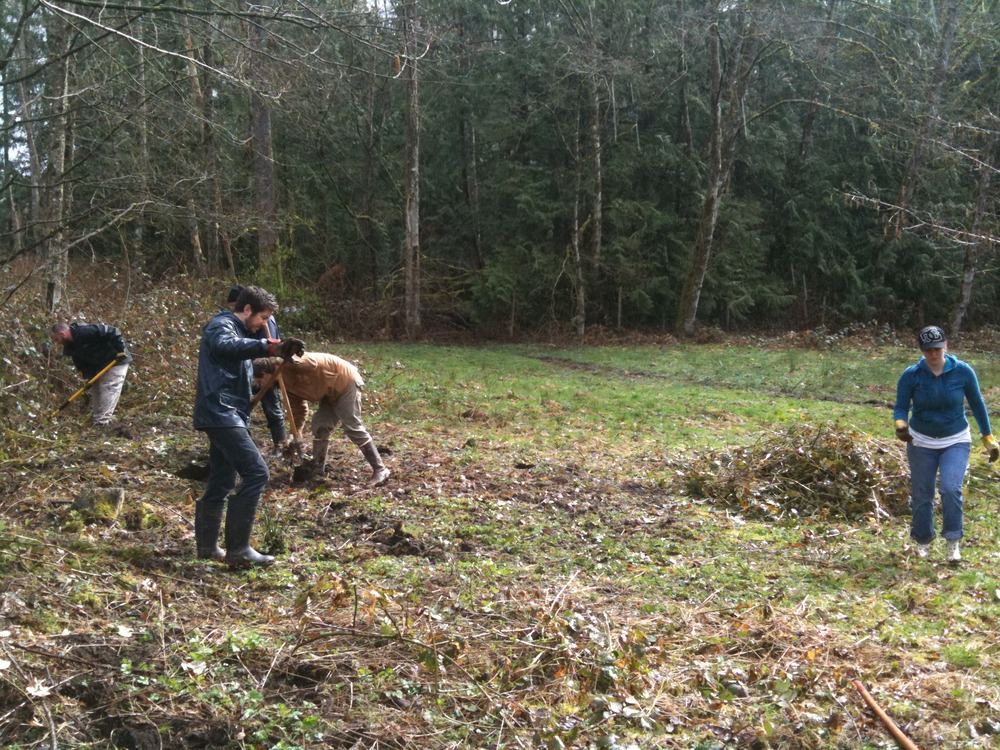 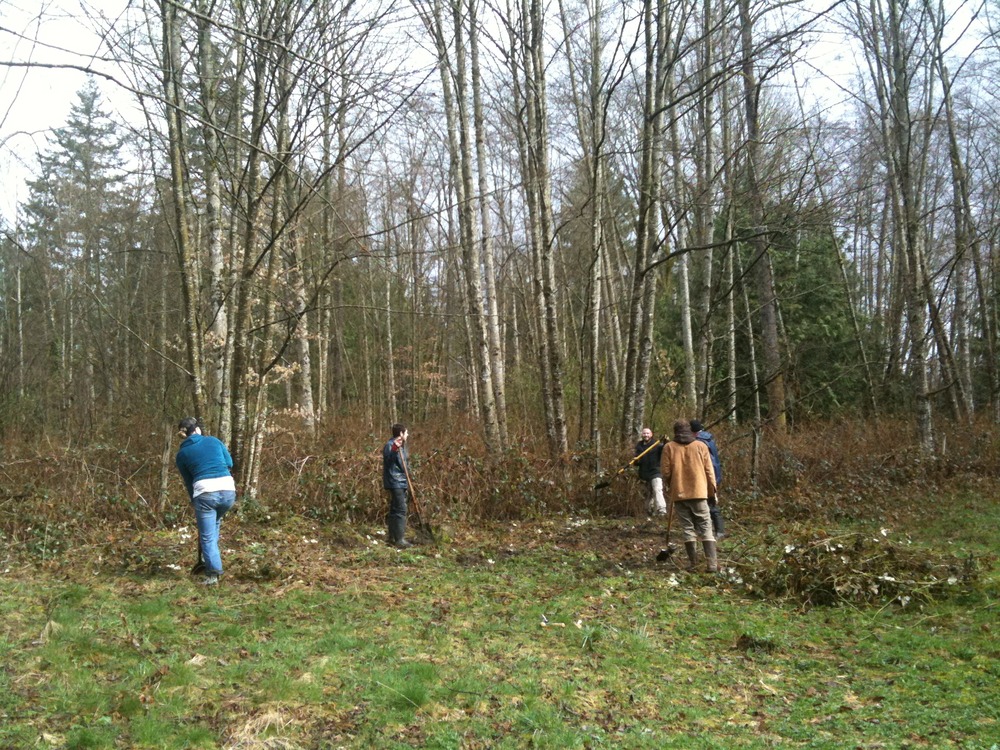 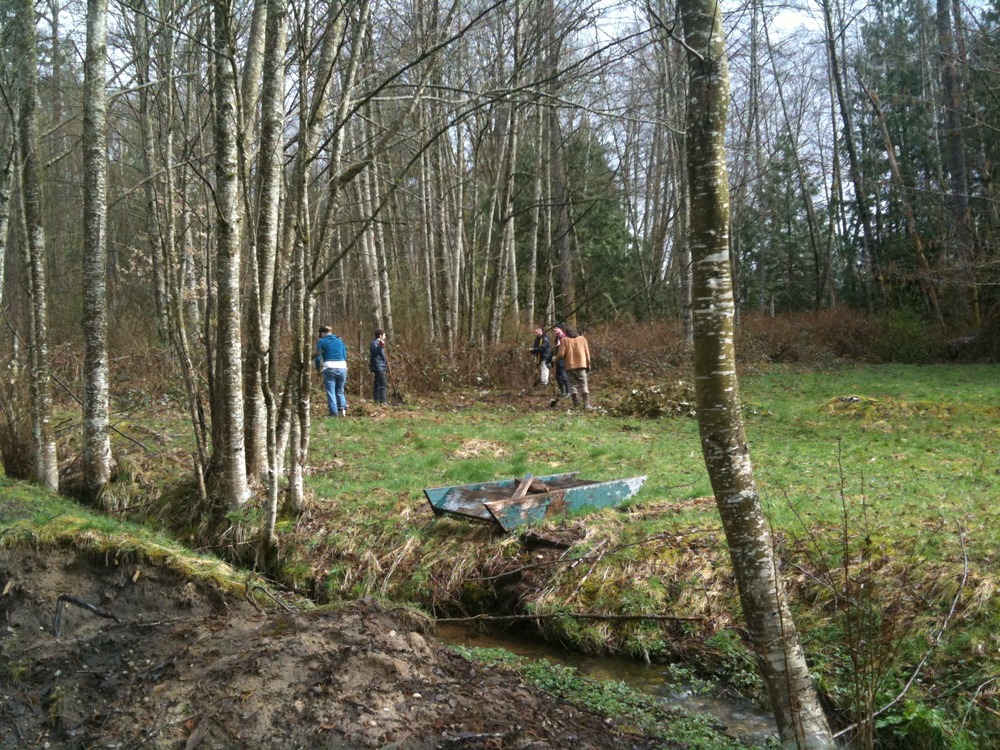 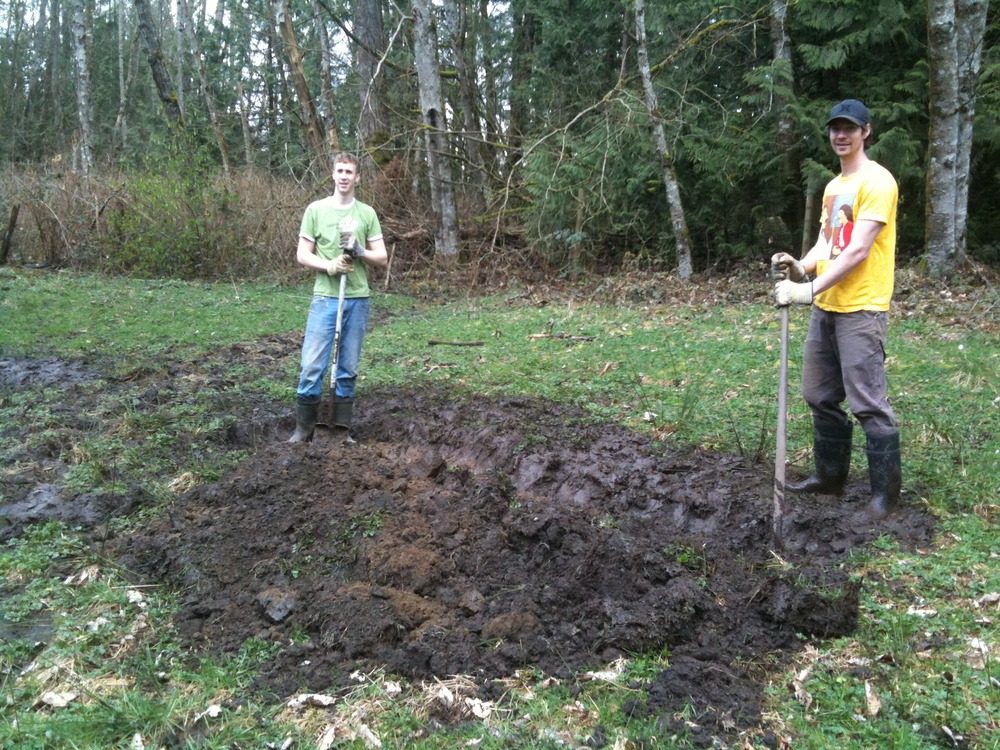 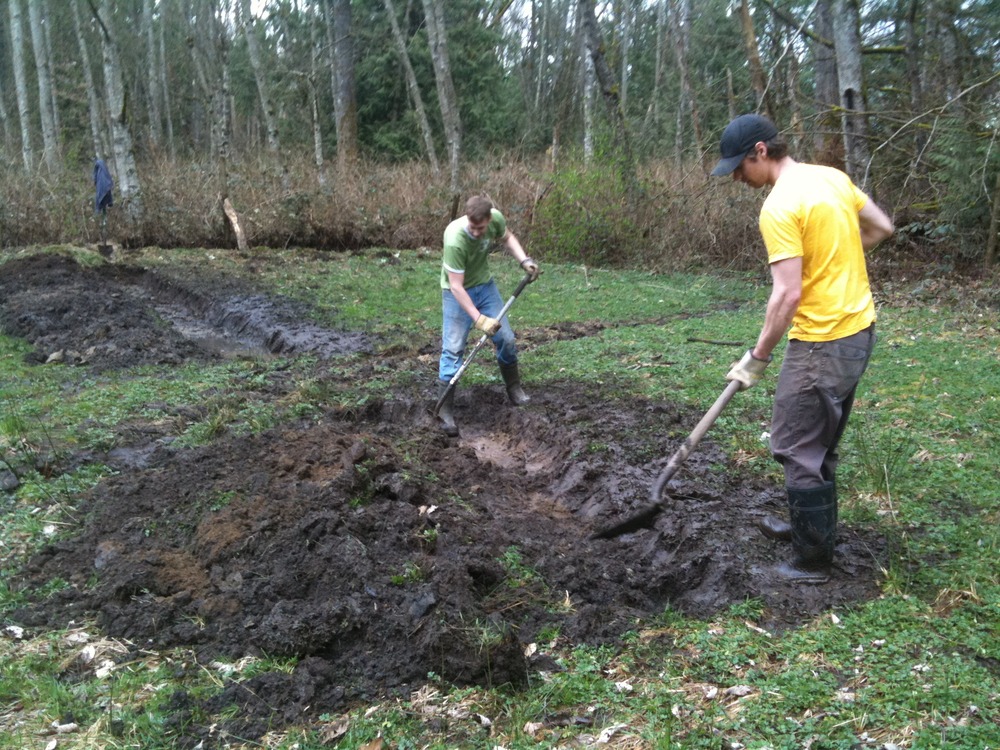 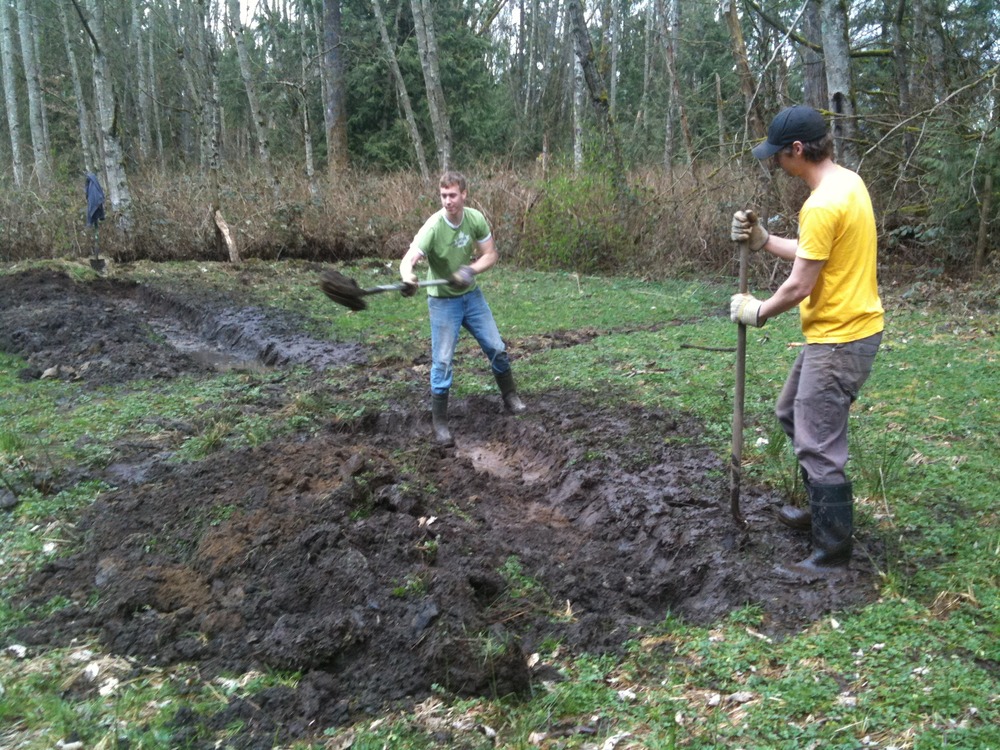 Here on the farm we have a back field that has pretty much been left to its own devices. Aside from some digging work that Chris put in to help drain the area, the field really isn’t being used for anything yet (other than the access point to our farm for local coyotes). Of course, given that it makes up a decent portion of our 2.5 acres, we’d like to make better use of it so we assigned some less-than-fun jobs to some eager friends at our work party.

Chris and some of his classmates from his gardening course took up the prickly challenge of cutting down overgrown blackberry brambles. They worked their way through one whole length of the field. We can see our fence now! Thank for taking on the scratches for us guys – it looks great!

Later in the day, Ryan and Travis began work on a system of swales in the field. Because our land is SO wet, we have to practice permaculture methods that make the most of our water runoff while doing what we can to dry out areas for planting. A swale is a low tract of land that catches water, holds water and slowly disseminates it into raised mounds of earth between it and the next swale. It can be used for both dry lands (storing water) and wetlands like ours (organizing and directing water rather than letting it settle everywhere). Our hope is that by building swales across our back field, we’ll be able to create a successful growing area (as opposed to it existing as the marshy land it is now).

Read about the basics of swales on wikipedia or check out this more detailed blog post on a swale-building project in Australia. I’m posting one of their photos below because it provides a great visual of what swales should look like. We plan on planting things on the raised mounds between the swales – plants that will hopefully flourish in a way that they never would if we planted them directly into the un-swaled land. 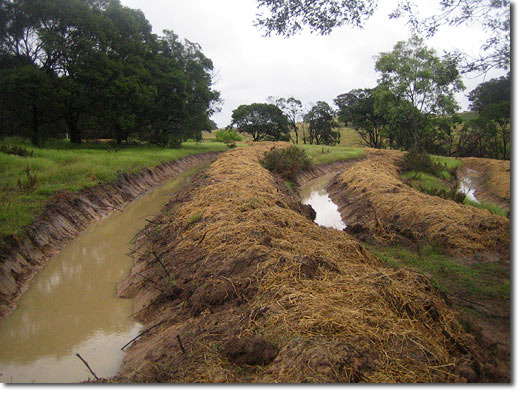