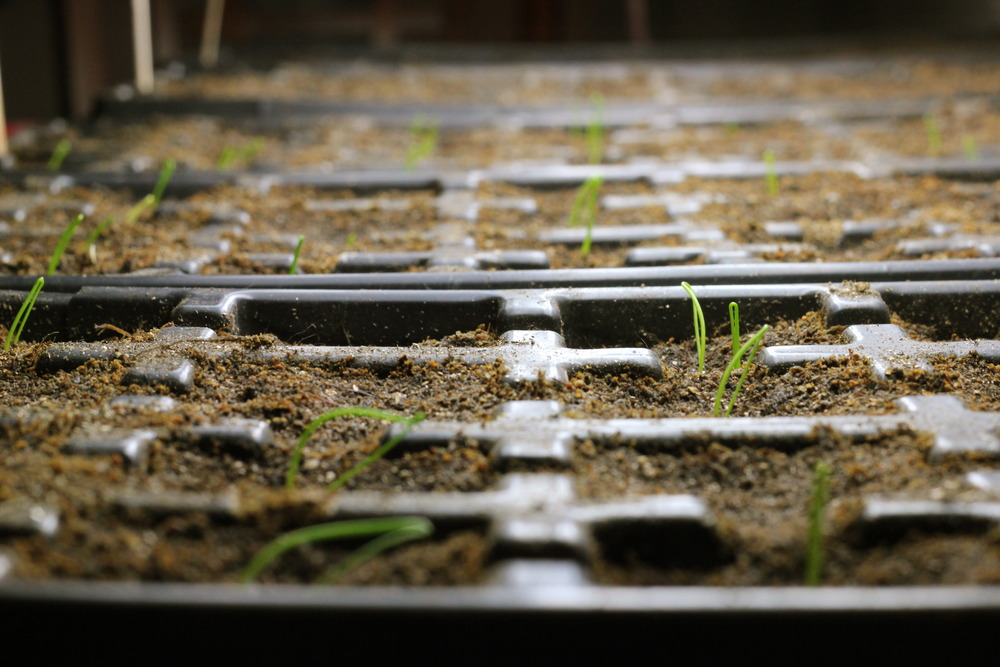 Photo: rows of tiny onion seedlings sprout on our kitchen table in anticipation of late-spring weather when they can be transplanted outdoors in garden beds.

I was talking to my friend S the other day about the influence of seasons on our lives. S, whose every email leading up to winter solstice included a countdown to the beginnings of longer, lighter days, is a long-time gardener who has years of experience with seasonal changes. Being a relatively new gardener, this winter marks the first time I’ve really felt and noticed the impact of how my now-closer relationship with the earth has influence over my own mental calendar.

The influence of seasonal changes on our day-to-day activities, emotions and mental states aren’t new to anyone, but the influence of seasonal-and-thus-the-garden’s-changing-needs is new to me and the fact that I’m feeling it now triggers feelings full of appreciation for the earth and the power of it’s pull (and thankfulness that it hasn’t completely foresaken humans who have so ignorantly and viciously tried to separate themselves from it).

It was a fairly simple and probably insignificant-sounding experience that inspired me to reflect on this (and I apologize in advance because I can already tell that my attempt to explain this in writing is falling far short of how I imagined myself being able to explain it in my head), but it began in late November/ early December. Our garden shrivelled up with the cold rains and shorter days and I gladly took that as my cue to hibernate indoors for a full month, spending very little time thinking about the garden and instead going to bed early, baking, cooking, reading and truly just being luxuriously lazy. My separation from the 9-5 schedule of office work almost a year and a half ago had quickly catipulted my mental calendar into a very loose, oh-it’s-that-day-of-the-week? kind of state, and so my month of hibernation from the garden gifted me with very little need for any kind of calendar at all.

However, as Christmas activities wrapped themselves up in that last week of December, I felt a very noticeable and unintended shift. I became aware of the subtleness of slowly-lengthening days, I began to observe thick, olive-coloured shoots of tulip and daffodil bulbs forcing their way through cold, frost-licked soil, and I quite suddenly felt rested and aware of the garden and its needs. It was in this moment that I felt it – the influence of the subtle changes in the season and in the soil beneath my feet on my own life. And in that very subtle but obvious moment, I felt a sense of awe and humbleness at being privy to the influence of nature on my physical and emotional self.

Although my experiences with the earth are largely human-created (I’m not, for example, spending my days foraging for wild foods in a forest. Instead, I’m changing soil environments to suit seeds that I want to plant and grow and ultimately conrol), I have, much more than ever before, separated myself from the age of industry and technology and begun to, inasmuch as I know how, return to what feels like a pre-industrial way of living (obviously still very far from what life was truly like back then, but it is a long shot from where I was a few years ago).

So, I guess I just wanted to express that somehow in a blog post. I wanted to recognize and celebrate the influence of the earth (and all those subtle workings within it and on it and around it) on my life. There is a sense of tenderness and magic when humans open themselves up to living in harmony with the earth and although that’s something I’ve always believed in, it seems that now I’m actually starting to truly experience it.