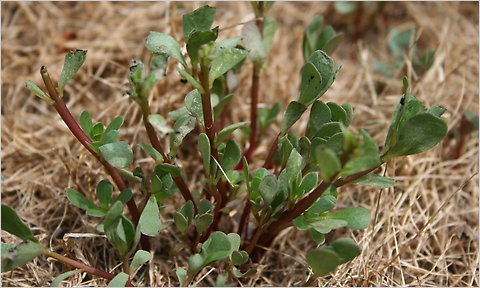 I just read an article about purslane written by the NYTimes Urban Forager Ava Chin. I’ll admit, I’d never heard of purslane before reading the article and the idea of trying to correctly identify ground cover succulents (they’re considered weeds in the US) to eat them intimidates me more than a little.

(Confession: despite my many years of ‘I want to be a farmer’ talk, I’ve never actually been brave about plucking apparently edible plants from roadsides and popping them into my mouth. I tend to do the tiniest nibble possible in order to avoid looking like a complete wimp. What can I say? I grew up with realistic warnings about poisonous plants – and I’ve erred on the side of caution ever since).

That said, this whole farmer experiment is meant to be more than just a fun joy ride to blog about. It’s meant to be a positive challenge – and learning to eat things that are unfamiliar and grow in inedible looking places should be part of that. Actually, learning how to identify things should be part of that – once I’ve got that down, the eating should come naturally.

So maybe I’ll start with purslane. According to the article and wikipedia, it’s incredibly healthy to eat (packed with omega 3) and can survive in sidewalks under intense heat. A healthy plant that’s nearly impossible to kill? Sounds like a new farmer success story waiting to happen.