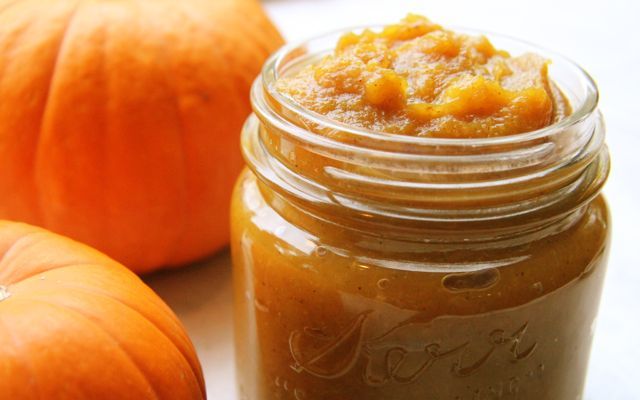 Chris and I are giving ourselves a challenge for the month of November: to spend no money on food. Instead, we are going to eat entirely from what’s already in our cupboards, freezer and fridge, and from what’s still growing in our gardens.

Our primary motivation behind this personal challenge is to save money (aka to not spend what we don’t have). I think it’ll also be a good experiment in creativity and waste reduction (even though most of our food waste goes into the compost or to our chickens, this will hopefully help us – okay, mostly me – eat slightly older stuff before it goes bad before eating something new).

So, to get myself in the mood (and, let’s be honest, to pass the time while watching the rain fall), I’ve already tried making two new food items this week from things we already had on hand: pumpkin maple spread (photo above) and homemade veggie soup stock (photo below). Both of these recipes produced things that will be able to be used in multiple meals and both will keep in the fridge for about 2 weeks (and even longer in the freezer).

I was inspired to make the pumpkin maple spread after seeing this recipe online. We have about a dozen pumpkins that didn’t quite finish ripening before the frost came so they’re now ripening (we hope) off the vine outside our back door. I thought this would be a good recipe to use up one of the pumpkins in, and, since we’re out of jam, figured this would be a good, free alternative to try. Verdict: it was super easy to make and is tasty. Our only complaint – the texture is like pumpkin pie filling texture. Not bad, but I’d like to try out another recipe that will hopefully turn out a little more butter-like in the texture department.

As for the soup stock, I wanted to make roasted acorn squash soup the other night (another squash we have in decent abundance curing in our garage), but the recipe called for veggie stock. Since we didn’t have any, I looked up stock recipes and quickly became convinced that homemade stock as opposed to store-bought stock is DEFINITELY the way to go. It’s healthier, fresher and uses up fresh veggie scraps and other veggie odds and ends that are in need of use (it also avoids the tetrapack packaging waste that most store veggie stock comes in). I loosely followed this recipe, but tossed in whatever we had a lot of in the fridge – onions from the garden that needed to be used, old(er) carrots from the garden, old(er) kohlrabi from the garden, dried garlic and herbs from the garden that hang in current abundance in our kitchen, fresh celery that we have growing in a planter outside our back door, etc… I also tossed in some left-over tomato paste (from a grocery store can) we had in the fridge, and gave the whole thing a good seasoning of rock salt and pepper. The stock did the trick in the squash soup I made and we still have a big pot-full of it in the fridge which I’ve already pulled from for two other recipes.

I’m excited about our November food challenge and thankful for all of the food we have from our own garden to pull from – fresh salad greens, radishes, and other roots veggies, as well as preserved tomatoes (frozen), garlic (dried), onions (dried), winter squash (curing), summer squash (frozen), beans (dried and frozen), and berries (frozen). I’m also thankful for the bulk amounts of grains we have (props to the Golden Ears Community Co-op buying club), as well as the various veggie and nut oils, and herbs and spices we already have in our cupboards. Let’s hope it’s enough to get us through the month (and let’s hope Chris can resist his urge to buy delicious chocolate bars every time he drives by Roots;). 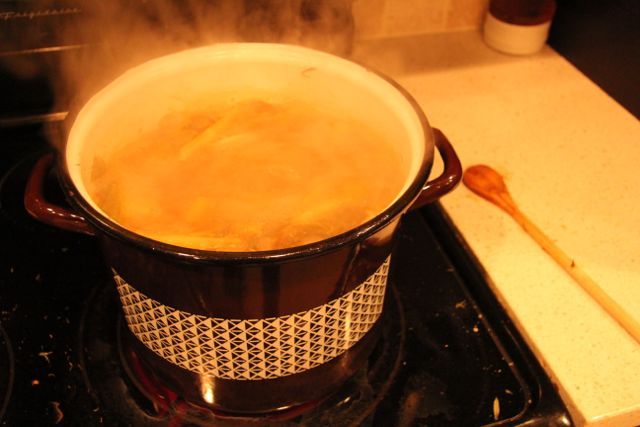 Sunday morning in the kitchen is stillness, light, the brewing of kombucha and the whisking of vegan crepe batter under the fragrance of hanging herbs and drying garlic.

“Be content with what you have; rejoice in the way things are. When you realize there is nothing lacking, the whole world belongs to you.” ~ Lao Tzu