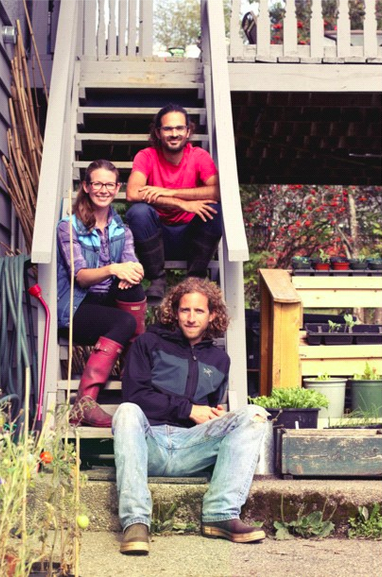 I feel almost bashful posting this because of all the lovely media attention we’ve been getting recently, but we made the news again! This time in the glossy pages of Converge magazine.

Back in October, a writer and photographer from the magazine came out to interview us about our project and to spend some time touring our property. We had a great visit with them, filled with really enjoyable discussions about rural life, city life, spirituality, community living and future dreams. We felt really encouraged and energized after the interview and were excited to read the story that got published in Converge’s Nov-Dec 2012 issue.

The piece is great! We love what Shara wrote about us – she really captured the feelings we have about this beautiful piece of property that we live on and our visions for it. You can read the article in the online edition of the magazine (our story is on pages 14-15 of Issue 9). I’ve also reprinted it below:

From Nine to Five to Farm for Life
By Shara Lee, Converge Nov-Dec 2012

Stepping our of my car and onto this small farm, I am welcomed by a duck who greets me with a little nibble on my boot buckle. He’s the friendliest creature with webbed feet I’ve ever met and he reminds me more of a dog than a duck.

Several of the Farm for Life crew – Jocelyn Durston, Chris Kasza, and Chris Moerman – are not far behind.

“This is Vincent,” says Durston. “Our pet duck.” Vincent was a rescue; his former duck girlfriend met a tragic end and the group adopted Vincent hoping he would bond with the other birds on the farm. “It turns out he’s more attached to humans,” laughs Durston.

We start with a tour of the grounds and Vincent follows closely as we wander through the two acres. He quacks for us to slow down when we move ahead too quickly.

Knowing where the food that they eat comes from and how it is produced is vitally important to those living on this Maple Ridge, B.C. farm. Because of this, they use an ecological farming method. Instead of pesticides, natural approaches are employed.

Durston describes using beer as slug control for instance. Slugs are attracted to the yeast in the beer, yet the substance is lethal for them. Moerman describes how the ducks on the farm are natural insect eaters. Crop rotation is also used so that if one plant pulls nutrients out of the soil, another will replace them. Kasza explains that they grow the herb comfrey because it pulls certain nutrients to the surface for other plants.

The produce they grow is specifically chosen to handle the lower mainland’s wet autumns and low-light winters. They’ve built makeshift greenhouses out of old windowpanes to aid some plants. The vegetation on the farm includes kale, a variety of gourds, beets, lettuce, mustard greens, stinging nettle, and more.

Along with Vincent, the other animals include chickens and rabbits. The rabbits were initially acquired by Moerman and his wife Julie Clarke for their meat (neither Durston nor Kasza eat meat) but the process of butchering proved to be more of a hassle than it was worth. Now only the eggs from the hens are collected (the chickens aren’t butchered either).

It’s a pretty impressive operation now, but only a little while ago it was an undeveloped plot of land. The project began when Moerman and Clarke invested in a 2.5 acre lot in Maple Ridge. The property had originally belonged to Moerman’s parents. It had been his family home and now the couple wanted to make use of all the land that sat untouched.

The farm began as a little experiment, one that Clarke and Moerman wanted their friend Durston on board for. Could a couple with a small child, along with a friend, grow enough produce to feed themselves for a year?

It turns out they could, and then some. “We’ve had more food than we could consume ourselves,” says Durston. Soon Kasza who has a background in permaculture design and organic farming joined the team. Today they’re selling their produce at local farmers’markets.

Durston began blogging about her farming adventures at farmforayear.com and through friends, interest in the project quickly spread. First it was the media, then people in their community grew interested. Now they are connected with both environmental groups and school groups. A number of elementary classes have toured the farm, and there are plans to turn Farm for Life into an eco-educational space.

After the tour we head over to a little bench where we sip on a fruity organic tea that Kasza explains came from a local farmer. I can’t help but notice how peaceful it is here and how sun-kissed each farmer looks in the chill of mid autumn.

Although they all live a seemingly idyllic farm life now, not too long ago each had proper “day jobs”. Though some were less conventional than others. (You may recognize Moerman from indie rock band Stabilo.)

Moerman says he favours farm life over busy city living. “I enjoyed living in the city too. But when you come directly from there to here there’s kind of this calm peacefulness that’s very noticeable,” he says.

Kasza agrees. Life on the farm for him means less time spent on idle activities like surfing the internet. “At the nine-to-five job, I was always tempted to check my Facebook account at work and always be on top of my email. You can unplug a lot easier here.”

Not only is life more peaceful here, it’s also deeply fulfilling. This is especially true for Durston, who spent many years in nine-to-five office jobs. “They were meaningful to a degree – but I wasn’t really feeling satisfied,” says Durston. Now her time is spent gardening during the day and supplementing her wages with tutoring jobs at night. “My goal is to get to the point, business-wise, where I can do this full time because I’m so happy doing this. I love it. It’s so creative and I really feel like the projects I work on have a tangible, noticeable outcome.”

Although they have been reaping the benefits of growing their own food with some left over to sell at the local farmers’ markets, Moerman thinks that one day it would be great to give a lot of the food away. While the four core members use the land the most, one plot is shared with a local farmer named Bob. “He’s a pastor at a small church and he just gives [most of] it away,” explains Moerman.

Growing their own food gives them a sense of empowerment. “Being able to control what you eat from the seed up is awesome,” says Durston. “We’re able to control what seeds we use and what we put in our soil, whereas at the store there’s still no labelling on items that have been genetically modified, and that’s a big health concern.”

Moerman agrees. Although they’re not entirely self-sufficient, he likes that they’re not 100 per cent reliant on “other people, corporations, or the economy.”

As for future plans, Kasza says that so much has happened in only one year he can’t quite picture what the future holds. “Maybe 10 years down the road we’ll have a meandering stream that waters everything. We wouldn’t event have to worry about water collection.”

Moerman jokes about wanting to build an earth ship, “a completely sustainable and self-sufficient off-the-grid structure built out of tires packed with sand, and then covered with earth.” If done properly, the earth ship would need no outside electricity or gas to heat it or cool it.

In the near future, Durston thinks they will continue to expand their educational initiatives, but also hopes that they farm will become something of a sanctuary. “I would love to see meandering trails and lots of little nooks where you can sit and read, and flowers everywhere…Like a modern Garden of Eden where people just want to come spend time.”

The day at the farm ends with a few photos. When it’s time to go, Vincent quacks an enthusiastic goodbye. Driving back into the city, there’s a polar opposite green-to-concrete ratio. The air feels a bit thicker here, the wildlife (which mostly consists of pigeons and crows) decidely less friendly. I can’t help but wish I was back at the farm. 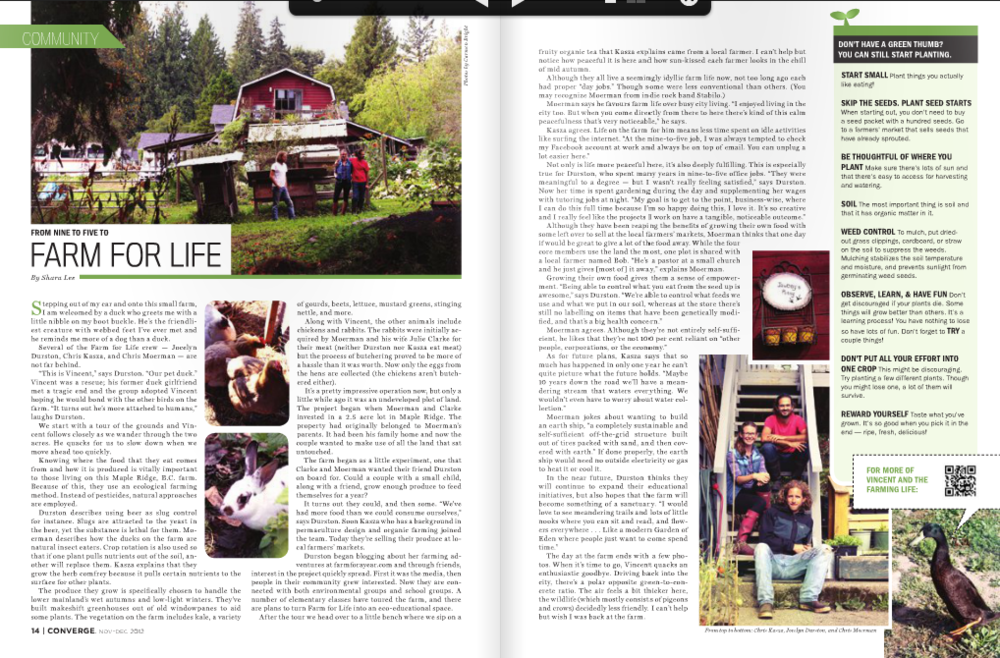 A screenshot of the story in Converge magazine (above) and two Converge facebook photos (below). 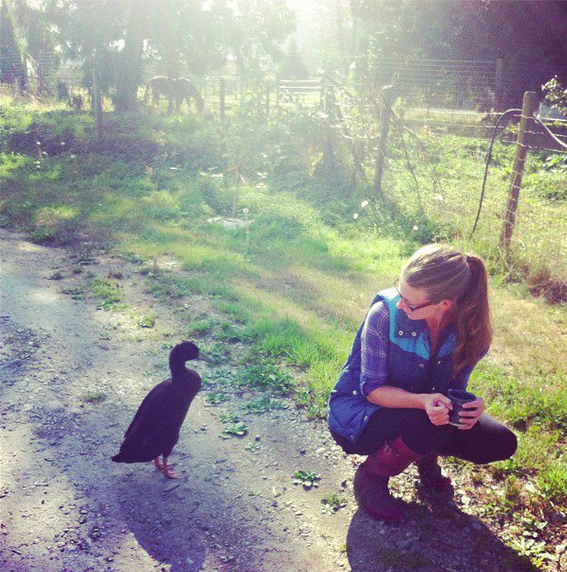 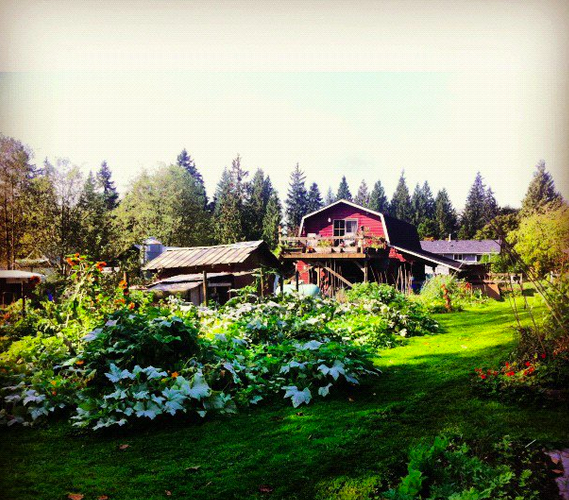 1 thought on “From Nine to Five to Farm for Life”