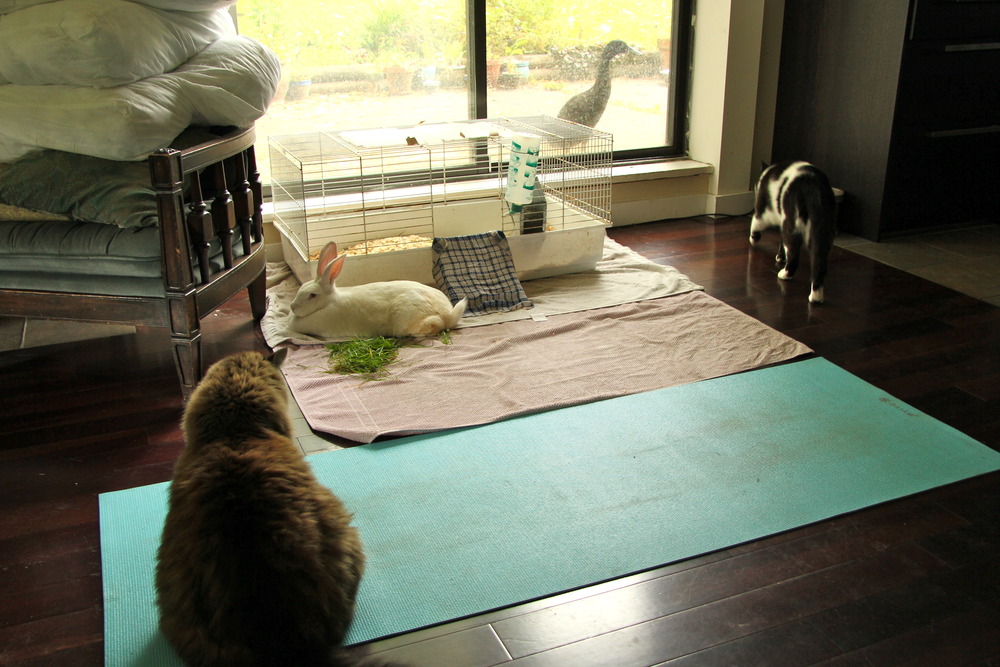 We have some really wonderful animals here on our farm and, as we currently have 3 (kinda 4) living inside with us, I thought I’d snap some photos and share their stories with you since it’s a rainy, indoor kind of morning.

The photo above shows a corner of our living room which has currently been taken over by Dora, our injured bunny. The space is now home to her cage and some towels and a yoga matt which are easier for her to move around on than the sleek hardwood floor. The shot also includes large Lola (bottom left corner), our sweet-as-pie Norwegian Forest cat who squeaks instead of meows; Fergus (upper right corner), our black and white tuxedo cat, mouse hunter extraordinaire; and Vincent (on the other side of the sliding glass door), our runner duck who spends 95% of his time trying to get inside with us. 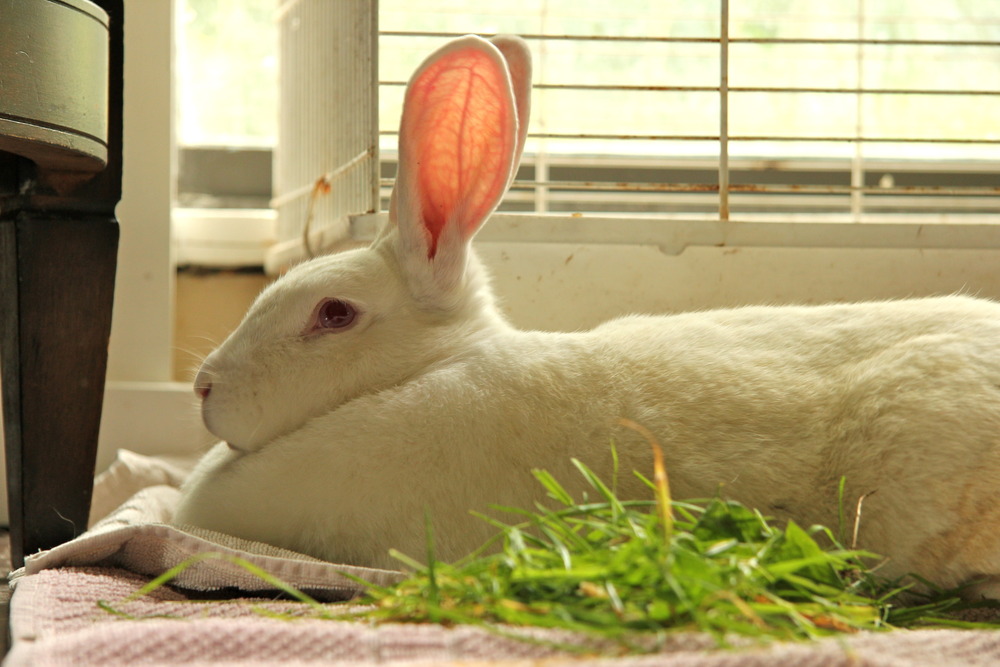 Dora is one of our four rabbits. When the farm family here on the property decided to forego the breeding of rabbits for meat, Chris took the remaining four on as his own pets to save them the fate of going somewhere else where they may end up on a dinner plate. In addition to Dora, we have Blackie, Frida, and Thumper. Currently, our bunnies share a run with our chickens, but Chris hopes to transition them into being house bunnies at some point because he loves bunnies A LOT and wants to give them a life full of safety, warmth and snuggles.

A week and a half ago, when we returned home from market, we discovered that Dora was dragging her back legs. Unsure about what had caused her injury and what was wrong with her, we bundled her up and brought her inside where we put her in a cage to try to keep her from possibly injuring herself further by hopping around. We took her to the vet where she had two x-rays taken which told us that she had no breaks or fractures. The vet recommended we keep her inside for a week and put her on anti-inflammatory medicine with the hope that, if it was a soft-tissue injury, she’d recuperate. It’s been a week and a half now and she’s finished her medicine. She’s doing better and is able to use her back legs, but they’re still weak so we’re going to keep her inside for awhile longer to monitor her and give her the time she needs to heal. We’re hoping that all it was was a soft tissue injury and that she’ll be fine after this. She’s a very sweet tempered bunny and we’re enjoying her company a lot. Hopefull she’s enjoying ours too. She’s getting lots of cuddly ear rubs and back pats and yummy greens to eat. 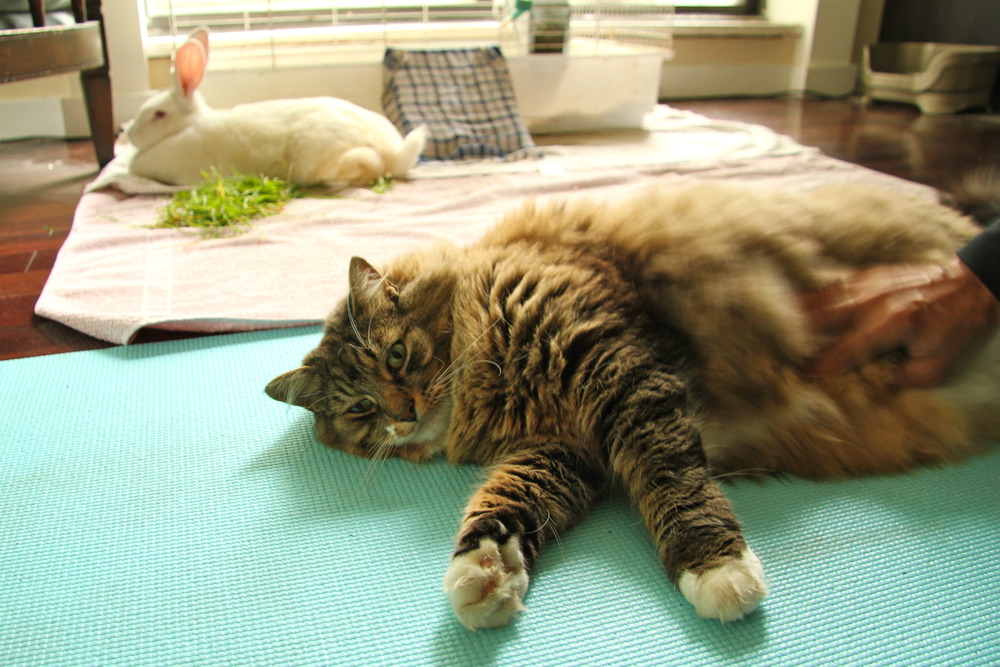 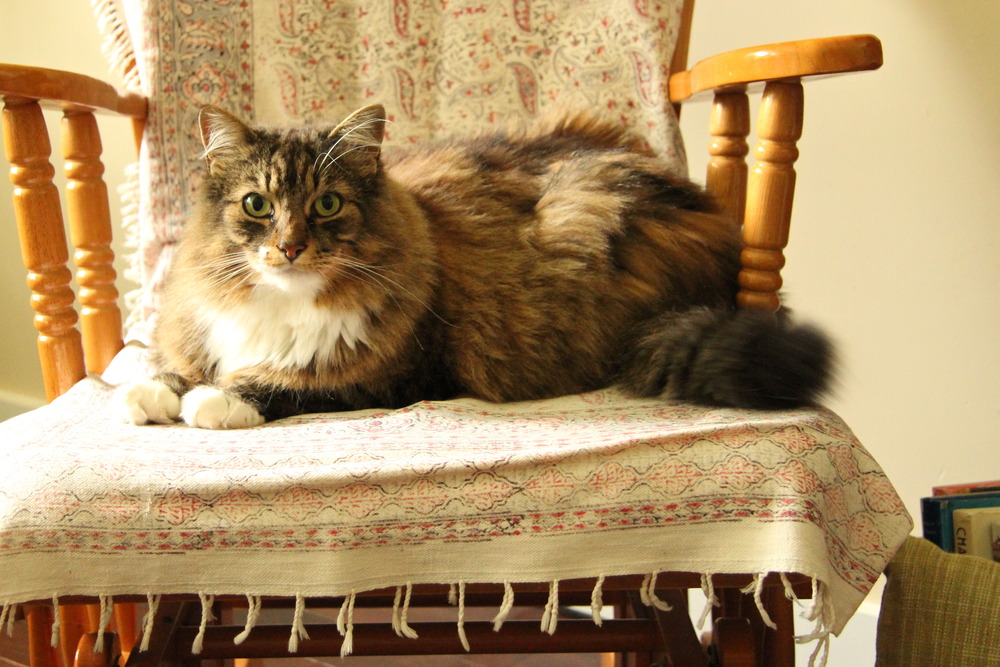 This is Lola. She is a BEAUTIFUL, sweet cat who’s original owner was on his way to chuck her and her newborn siblings in the forest because he didn’t want to deal with them. He was intercepted by a couple who said they’d take responsibility for finding homes for them and I adopted Lola, the last of the bunch. She’s large and fluffy and likes nothing better than sneaking up on the bed with us and getting belly rubs. She makes the cutest noises, including an ‘awwr-ooOO’ meow that sounds exactly like she’s calling ‘hellooo?’. She does it throughout the house when she can’t find us. It’s ADORABLE. 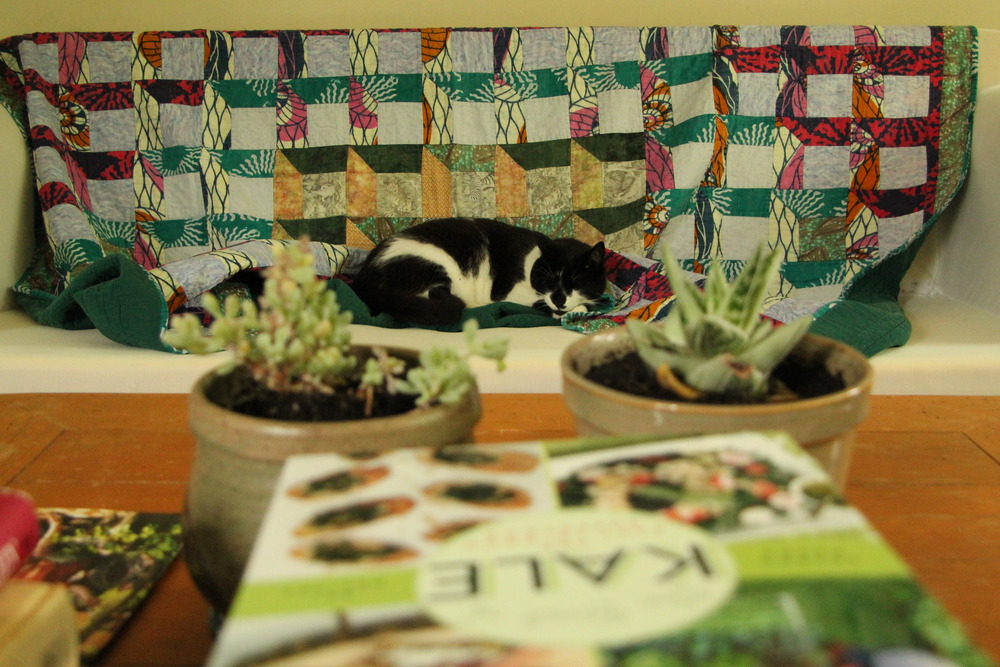 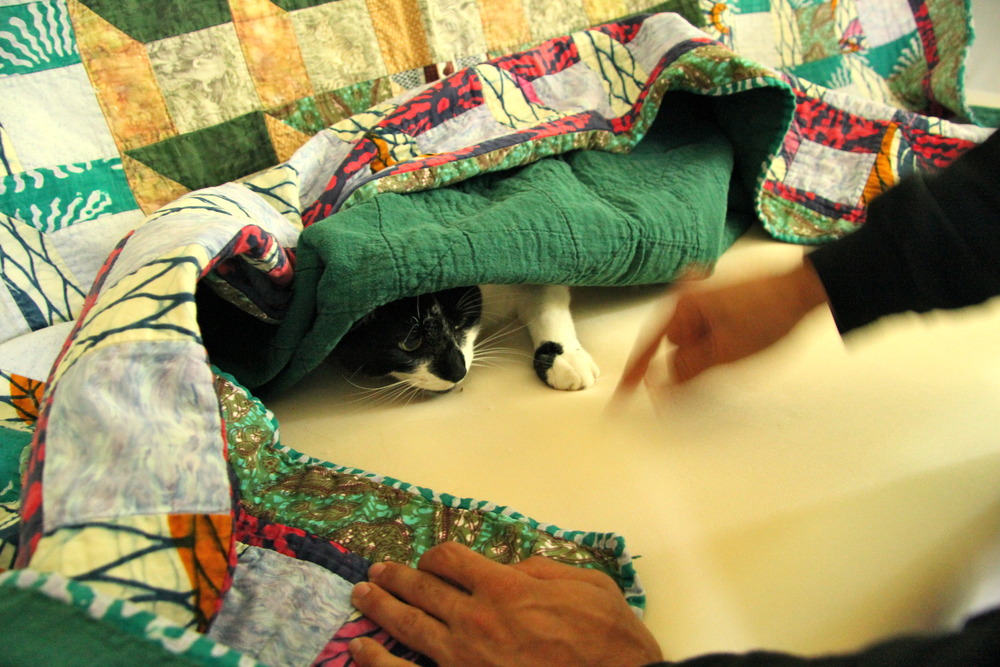 And then there’s Fergus who loves to hide in cardboard boxes and crawl under quilts, including the one in the photo that I put over our bare couch while washing the couch cushion covers. (You can see Chris pointing out to Fergus all the spots where he’s already dug his claws in ;). Fergus and I have a special bond. He was my first pet after I moved away from home and I love him more than I think my heart can handle sometimes. He’s feisty and loyal and affectionate and totally awesome. 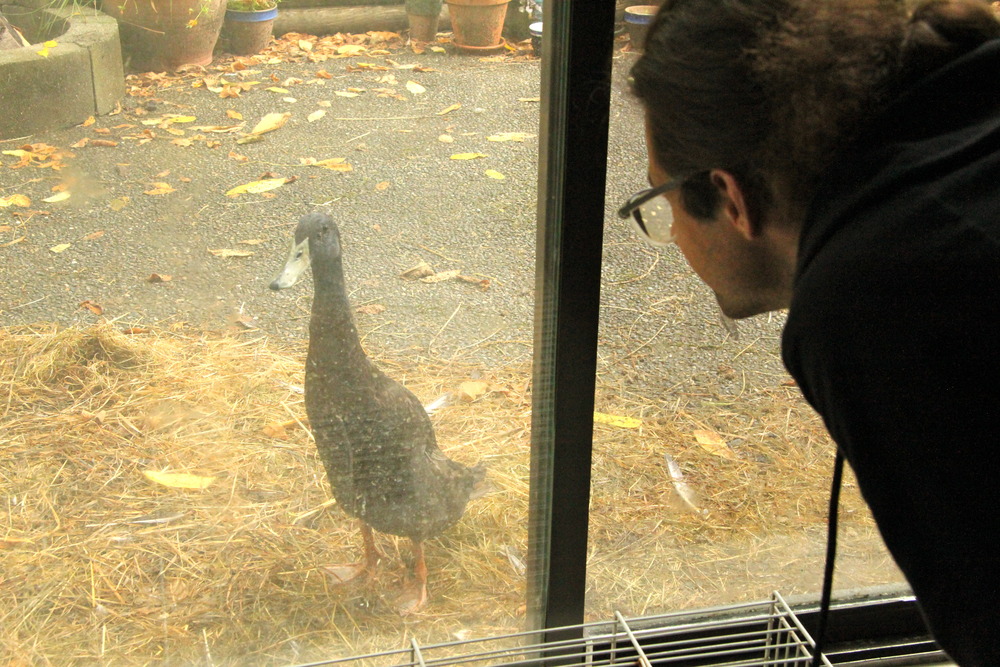 Lastly, we’ve got Vincent. Vincent doesn’t live indoors with us, although he’d really like to. We’ve let him come in a few times, but he’s such a poop machine, it’s never lasted long. The farm adopted Vincent about a month ago from a small hobby farm that was closing down. They wanted him to go to a family that had other ducks so he could have some friends (his girlfriend had been killed by a raccoon a month before we took him in). We have three muscovy ducks who keep the slugs away from our garden beds and we were hoping Vincent would join them in their garden wanderings, but he seems to have adopted Chris and I. He follows us around the garden when we’re out in it and spends the rest of his time on the other side of our sliding glass door, knocking on it with his beak when he wants food and watching us and quacking at us. We moved his duck house to our patio because it was getting too challenging trying to coax him into the paddock with the other ducks. So, he sleeps and eats and poops right outside our window now. Lucky us ;)

Chris and I really love animals and it seems like we’re unintentionally following in the footsteps of my ins
piring brother Rob and his fiance Olivia who have adopted 10 unwanted dogs, 12 cats and a fox, and who also provide a temporary home for other animal rescues until they find their forever home. Rob and Olivia are amazing. They live in Northern Ireland where Olivia is a vet and Rob is a photographer. We’re hoping to get over there next year to visit them and meet their large, furry family.

It’s pretty hard to say no to animals in need. You have to be realistic about your time, funds, and living space before you commit to adopting animals, but being able to give a home to creatures who need one is a really rewarding experience.

*** CUTE ALERT *** Chris just nudged me as I was typing to point out that Dora has, for the first time, made herself comfortable on the couch next to Fergus and Lola. Seems like one of our bunnies is well on her way to transitioning into a house bunny (if we can successfully litter train her that is ;) 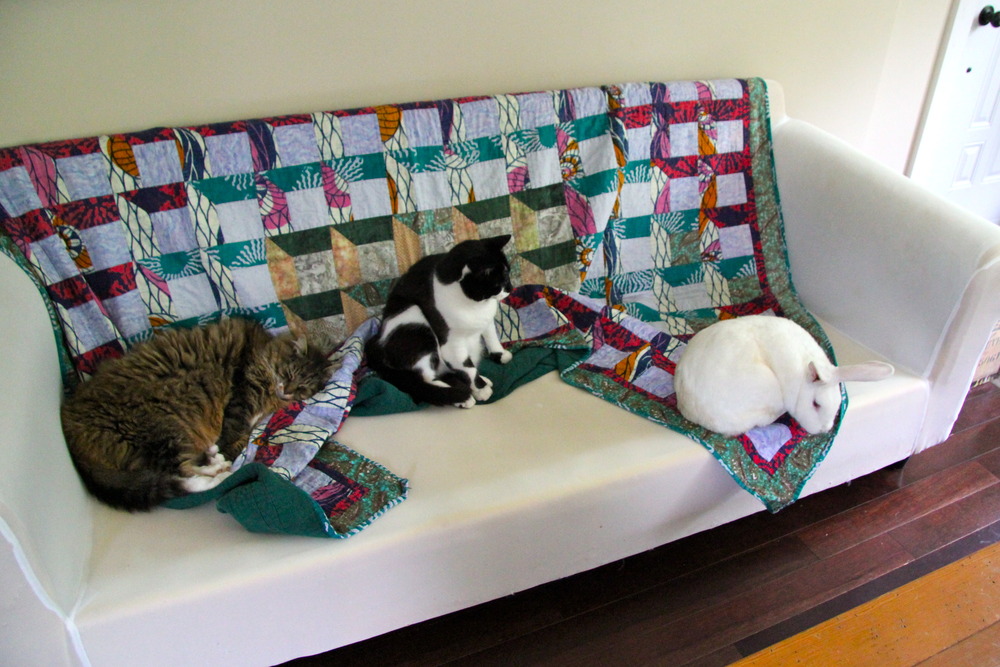