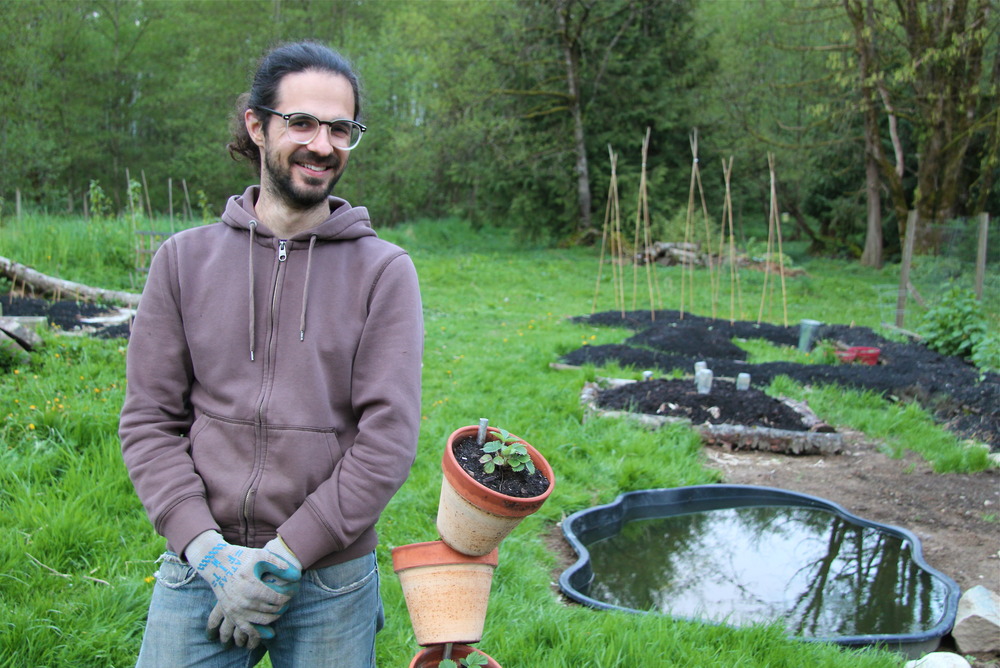 I’m stoked to announce that we have a new addition at Farm for Life!

Chris Kasza moved to Maple Ridge from Vancouver in March of 2011 to pursue an opportunity to create a working and demonstration market garden on a few acres in Silver Valley. I met Chris in August of 2011 and our common interests in permaculture, homesteading and road trips with co-op and vegan restaurant destinations quickly developed into a farm friendship and romance. Since we wanted to spend a lot of our time together, but were both committed to working on separate acreages, we began working side by side, splitting our time between the two properties. When this started happening, it wasn’t long before we started talking about joining forces to turn our gardening adventures into something we could try making a living at . By the end of 2011, we were making plans to expand our garden plot spaces so we could grow enough produce to sell at local farmers markets this summer. Because of so many collaborative efforts, it was just natural that we invite him and the property he lives on to become an official member of The Farm for Life Project. Yay! A new member and a new property. We’re growing!

Chris has been involved in some really cool experiences. Here’s a little bit about him:

Before moving to Maple Ridge, Chris worked on several ecological agriculture projects. In 2008, he spent the summer as a WWOOF volunteer at an international community/ burgeoning ecovillage in Herefordshire, England called Earthworm Housing Coop. This experience strengthened his interest in small-scale projects, self reliance and community involvement. Two important concepts that were introduced to him during this time were permaculture and transition towns. While transition towns are a fairly new idea, he’s been lucky to participate in two now; Village Vancouver in 2010 and currently as a member of the Golden Ears Transition Initiative.

After returning to Canada in 2009, Chris worked as a farm apprentice in Ontario’s CRAFT (Collaborative Regional Alliance for Farmer Training) program at The Ark Farm in Tiverton, ON. He also had the opportunity to finish off the 2009 extended growing season as a volunteer at Everdale Organic Farm and Environmental Learning Centre.

In 2010, Chris decided to move to Vancouver, BC. While it meant giving up playing in the dirt of rural locations, he still managed to get his hands and knees dirty as a member of the Collingwood Community Gardens (and by engaging in a few stealthy plantings around his neighbourhood, but that’s hush hush).

Last year, Chris relocated to Maple Ridge to engage more actively in his interests in food security, biodiversity and sustainability issues. In addition to his market garden project, he is hoping to use the property he lives on to provide educational opportunities related to self reliant living (gardening, seed saving, permaculture classes, small-scale DIY electricity, grey water systems and more).

We’re very lucky to have him join The Farm for Life Project and are excited to see where this partnership brings all of us. Welcome to the family Chris!

1 thought on “Chris Kasza joins the Farm for Life family!”