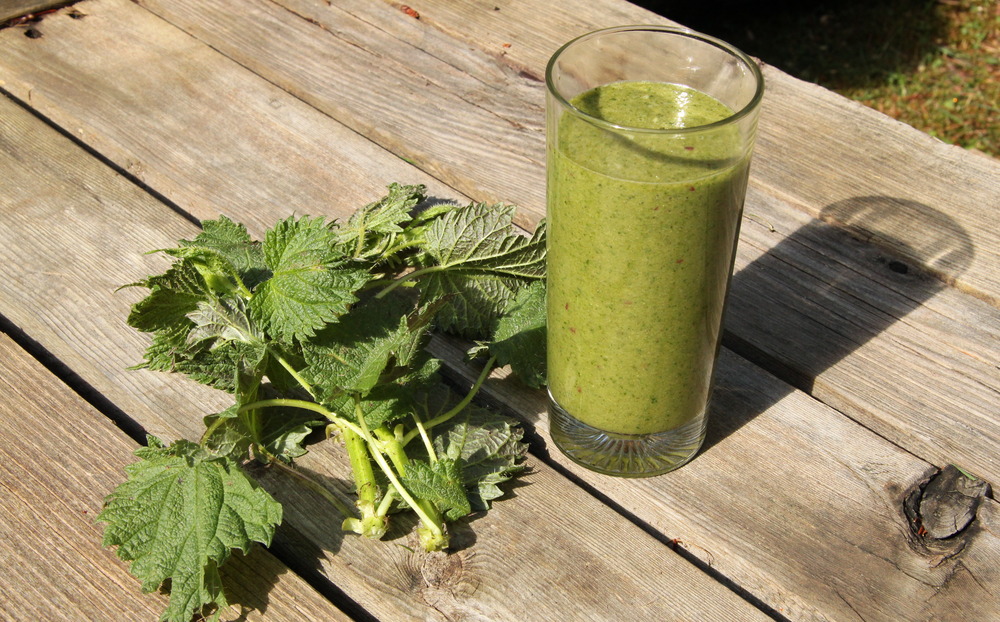 I’m dating a guy who loves to forage for food whenever he can. Yesterday he threw dandelion greens and roots into our mashed potato dish. The flavour was a little more bitter than I’m used to, but I still ate it. I ate it because I trust him, because I know it’s supposed to be good for me and because I’m kinda fascinated (although not very experienced) with eating free, wild food in season.

Today Chris made us stinging nettle smoothies. Stinging nettles are something we have a lot of at the farm (growing along fence lines mostly) and this is the time of year, when the leaves are young and tender, to harvest and eat them. (Apparently they produce gritty particles called cystoliths after they have flowered and gone to seed which irritate the urinary tract, so don’t try to consume them when they’ve reached that stage).

Stinging nettles are supposedly very healthy. They are full of vitamins A, C, iron, potassium, manganese and calcium. I’d heard of stining nettle soup, tea and even beer before, but it wasn’t until I met Chris that I started adding them to my diet.

I was a little wary at first. After all, they are stinging nettles. Aren’t all the stingers going to irritate my throat and the inside of my mouth like they do my hands when I’m trying to weed them out of the garden? Apparently not…as long as you prepare them properly. A little internet research just informed me that boiling the leaves in water removes or softens the stingers, but Chris just massages and pounds the fresh leaves on a cutting board and that softens the stingers enough to eat them.

Over the past month, Chris has added stinging nettle leaves to mashed potatoes (soooo yummy!) and today we had the smoothies. The great thing about smoothies is that you can experiment with flavors and textures by throwing in whatever fresh fruits, veggies and herbs that you have lying around the kitchen (or growing up through the pavement cracks ;). I’ve been making fruit breakfast smoothies for years, but only recenly started adding vegetables to the mix (tip: kale and berries go great together!). Knowing that the veggie-heavy ones are even healthier than fruit-only smoothies made me open-minded and intrigued enough to try Chris’ stinging nettle smoothie out today. Verdict: really, really refreshing and tasty!

Here are the ingredients that Chris used, but if you want to try it yourself, feel free to experiment with whatever you have in your fridge and cupboards:

Like I said, now’s the time of year to harvest young stinging nettle leaves, so if you have them crowding out your garden beds or have spotted them on the side of the road (in places that don’t get sprayed with pesticides), I totally recommend harvesting some and trying them out. There are oodles of different kinds of recipes online to get you started (I want to try this Stinging Nettle Pesto next!), so get out, get foraging, and enjoy!