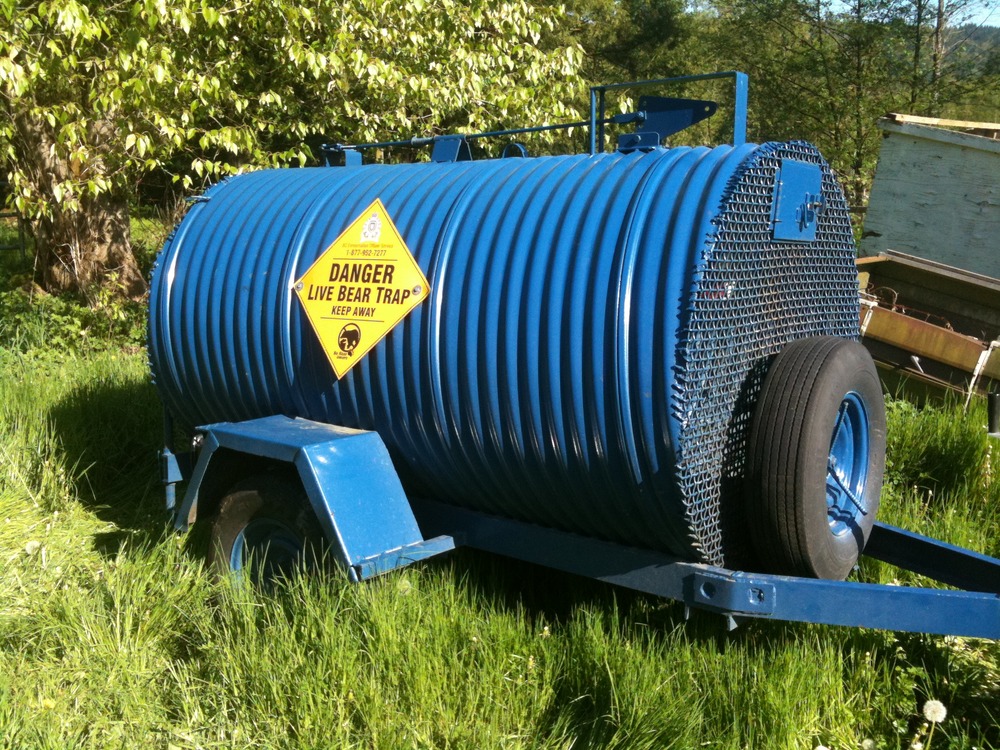 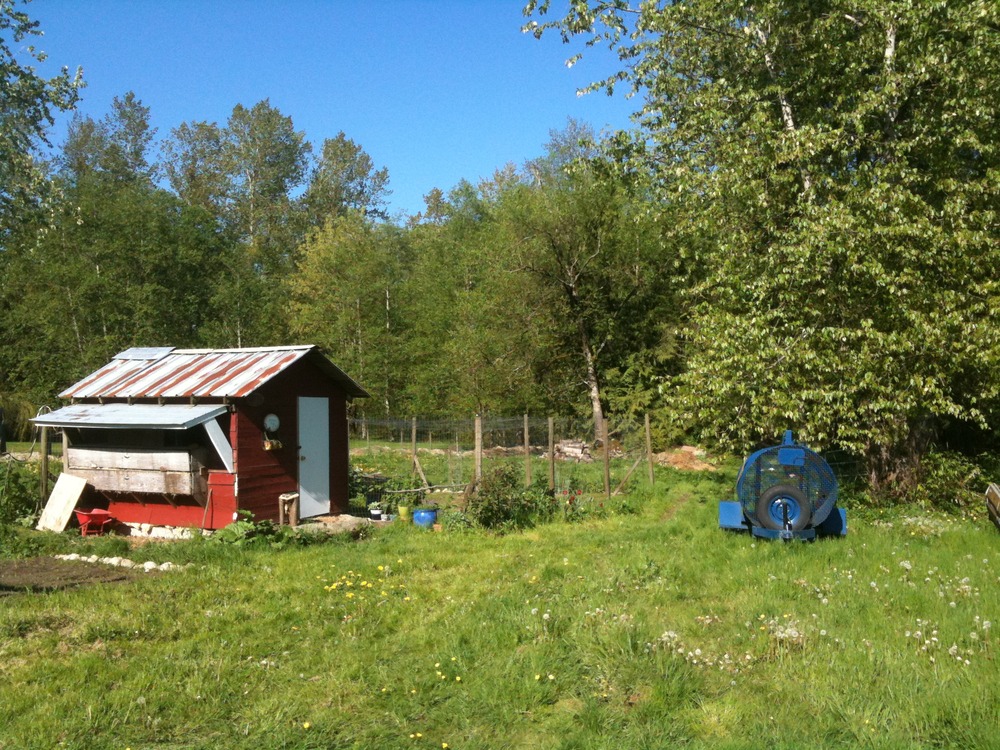 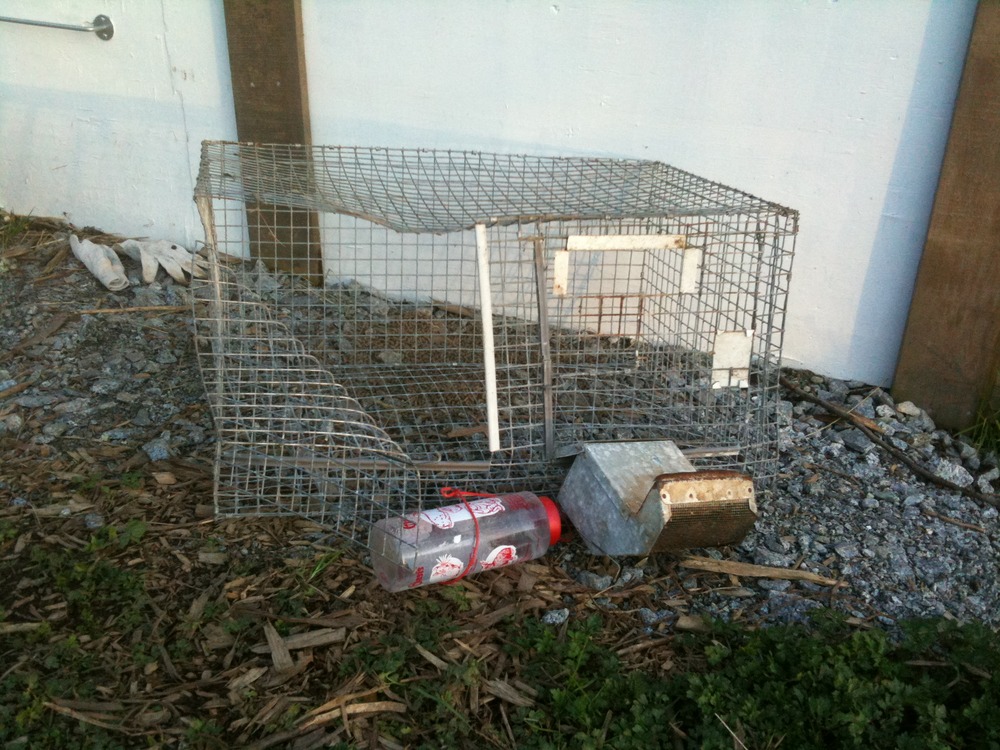 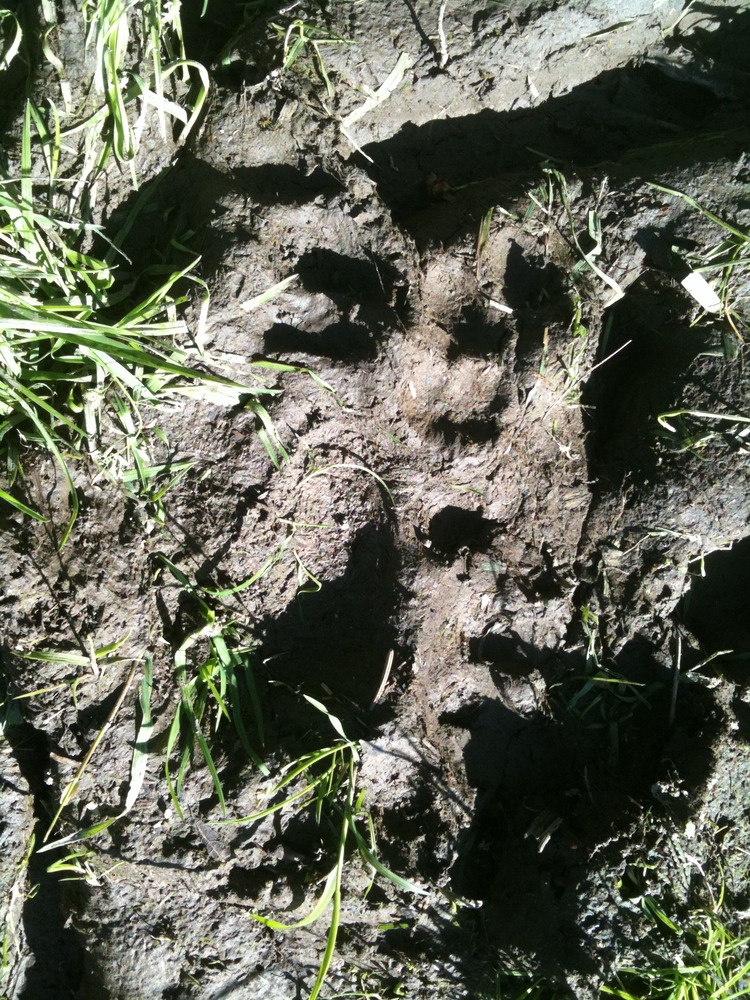 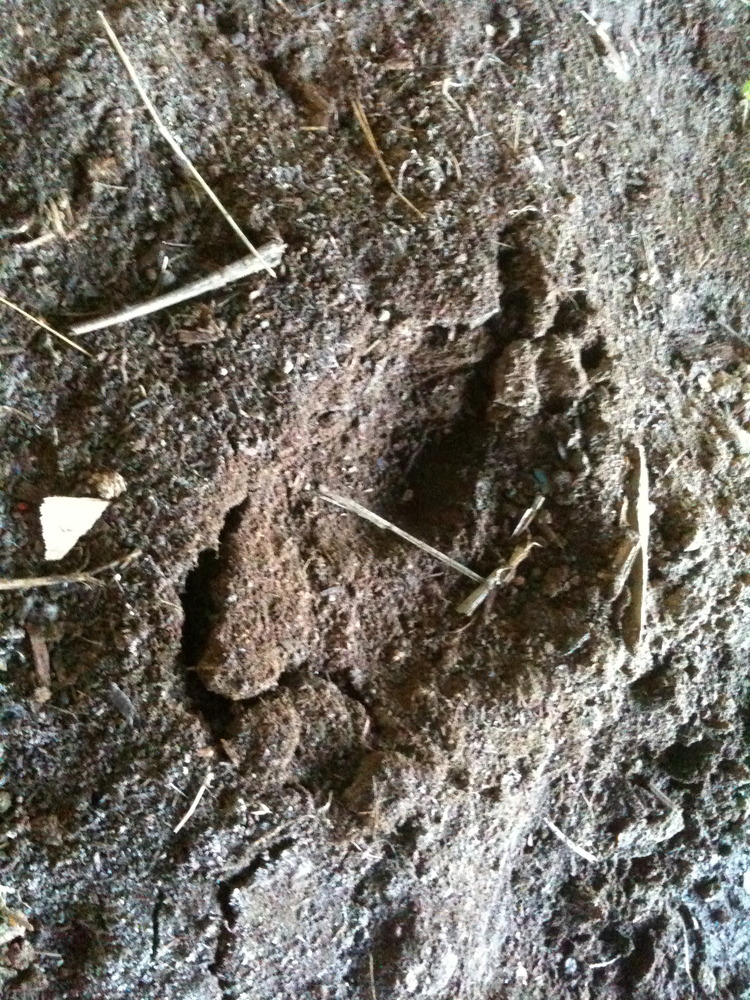 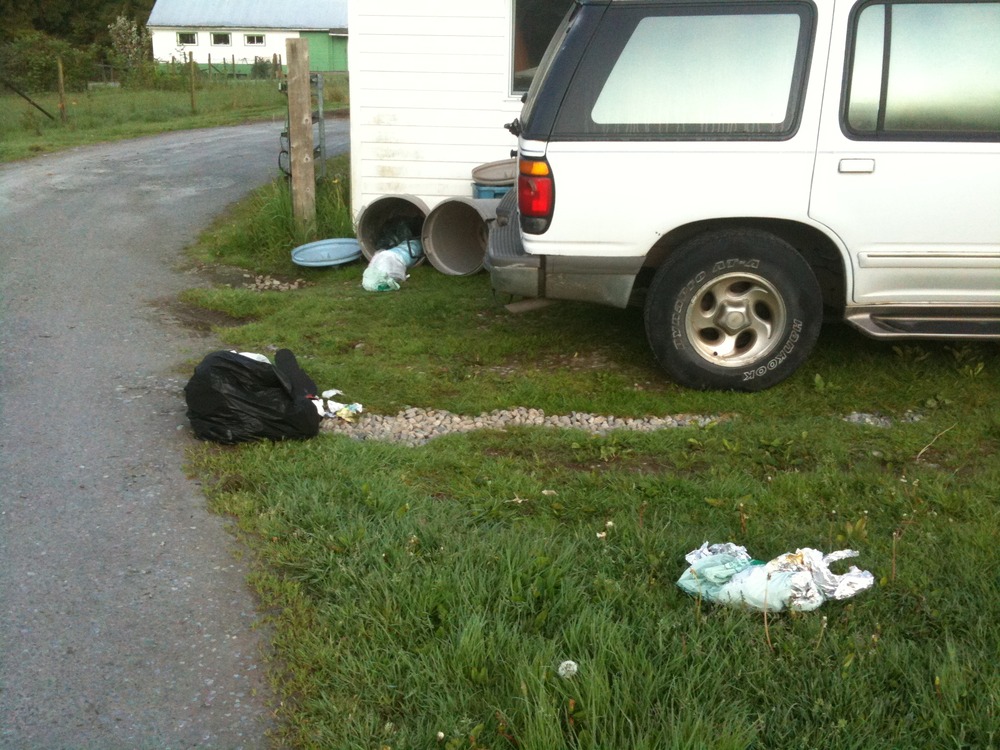 Elusive. That’s what this bear is. Well, kind of elusive. We’ve seen him and seen signs of him, but he’s doing a great job avoiding getting trapped in our live bear trap.

Since writing my last post on the bear a few days ago, it’s been a busy bear-related week. The same day that I wrote that blog post (maybe even WHILE I was writing that blog post), the bear came back in the middle of the sunny afternoon and pulled one of our rabbit cages off of our composting units and bent the cage door open. I discovered it, empty, on the ground when I got back to the farm after some work meetings in Langley (photo above). The missing rabbit was our buck (our big papa rabbit). After I had a bit of an emotional melt-down, Chris and I nailed 2x4s across all the other rabbit cages in the hopes that it would keep them safe in case the bear decided to return. Since we haven’t been able to find any traces of the rabbit (unlike the chickens the bear got), we’re (unrealistically?) hoping that it managed to get away while the bear was trying to get it. Rabbits are fast, so you never know…

The next day (Wednesday), I saw the bear. I was outside filling up the rabbit feed dishes (middle of a sunny day again) and I saw him in our back pasture, about 20 feet beyond the chicken coop. I scooped up my cats and locked them in the trailer, grabbed a big metal bell and attempted to scare the bear off with the bell and by shouting. No such luck. He looked at me, then ignored me and continued hanging out. He’s not very big. Not a cub, but certainly not full-grown. A teenager bear.

I called up the local wildlife conservatin officer to report him. The fact that he’s been getting our livestock and doesn’t appear to be scared of people isn’t good. They told me they’d come by on Thursday to set up a live bear cage to try to catch him.

He was back that same night, however. After our weekly farm family dinner, I was in bed in my trailer when the cats started acting up. I looked outside and in the light of a sensor light on the barn 20 feet from my trailer, I watched the bear stick his head under the tarp covering our trailer of junk that is meant for the garbage. He found a bag of something enticing, pulled it out and dragged it towards the back forest. When I woke up Thursday morning, there was trash everywhere. He’s gotten into our garbage cans at the back of the house and dragged the bag I saw him with to the back meadow/ forest before tripping it open.

The conservation guys came on Thursday and did a sweep of our property. They found lots of signs of him – bear prints, poo, trash and chicken remains in the forest… They’d been getting a lot of calls from people in our area about this bear, but from what they could tell, he’s made our property his home base. They set up the bear trap and baited it with sardines and molasses and showed us how it works and how to open it if a child or a dog gets into it by mistake. That was 4 days ago and still no bear.

The interesting thing is that he has been back. He got into garbage and compost again yesterday and I actually thought we had caught him because when I got up in the morning and looked, the door to the bear cage was closed. I went out to check it and the cage was empty! He’d gone in, gotten some of the bait and left without getting caught, but caused the door to shut behind him. See. Elusive.

We’ve now heard a number of stories about this bear, including him jumping up and down on the truck of a car up the road that had garbage in it. This teenager is getting into everything!

The sad thing is that when they do catch it, he will have to be euthenized. This isn’t what we wanted at all. We were hoping they could relocate him, but the conservation officers said that because he’s a predator now (eating farm livestock) and showing no fear of people, he’s too dangerous to keep alive. And I learned that relocating doesn’t really work – they always find their way back. It’s sad. The learning lesson for us is that we (and other people in this area) need to do a better job of keeping farm livestock and garbage inaccessible so that the bears stay back in the forests eating what they naturally would,
leaving us and our animals alone, resulting in human/ wildlife harmony (or as close as we can be in harmony in this kind of situation).

1 thought on “the bear saga continues”