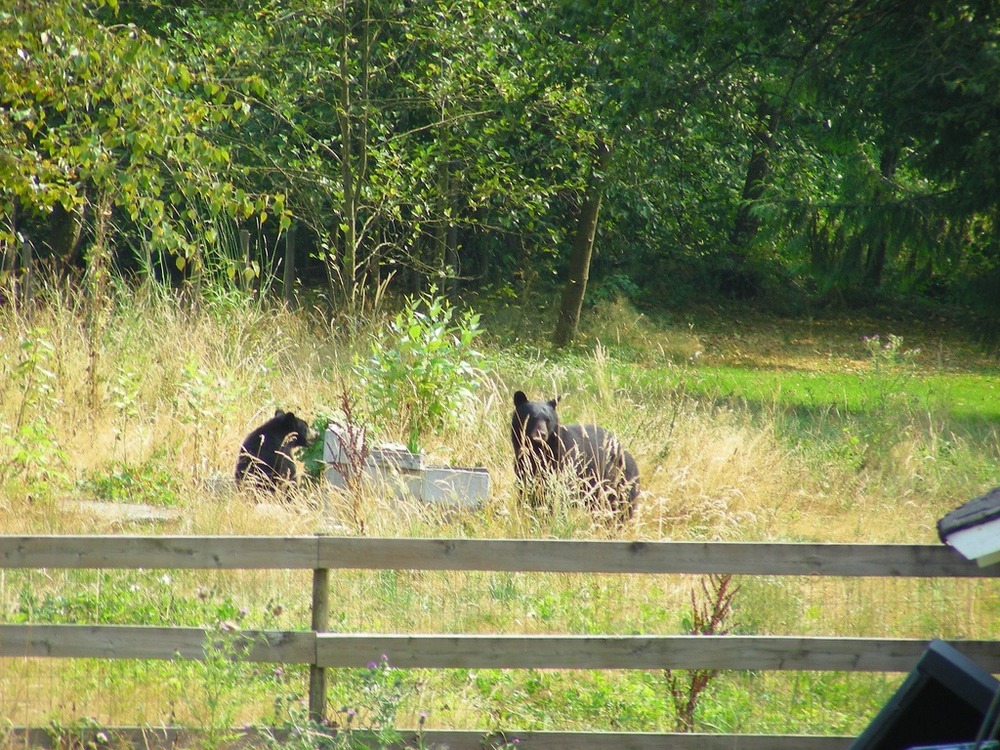 Photo taken last summer by Murray when the bears were after the scraps in our old compost pile.

For the second time in two weeks, a bear got into our chicken coop last night and took off with one of our chickens (we’ve lost two chickens in total now to this bear). We haven’t seen him ourselves, but our neighbour across the street saw him in her yard and our neighbour to the north had a fence destroyed by him. I suppose it is that time – hibernation is over and the bears are out to play (and eat).

The first time the bear got to our chickens, he came around the north side of the coop (just to the right of where the bears are in the photo above) and climbed over the fence that lines our garlic patch. He pulled down the door to our nesting boxes and pulled a chicken out that way. I discovered the destruction and the remaining features in the morning. I also discovered a trail of chicken feed that led out to our back meadow. The bear had grabbed a feed bag and dragged it out back, along with the chicken’s body – the remains of which weren’t far from the mangled bag.

I’m thankful he has only managed to get one chicken each time and that the other chickens haven’t tried to escape through the open nesting boxes after he leaves (hopefully they’ve been scared into staying where they’re safe – far back in the coop away from the bear’s claws). We do have to do something though – we don’t want to lose any more chickens (I love our chickens!).

I’ve renailed up the nesting boxes, but clearly he’s strong enough to rip them open if he wants to. Time to do more – I’m going to sprinkle cayenne pepper all around the nesting boxes in the hopes that it will deter him if he gets all over his nose. We’re also revisiting the idea of getting another farm dog to help keep watch and scare intruders away. And I think we’ll figure out some more secure fencing options. Cayenne pepper alone probably won’t do the trick.

Now that mr. bear knows we have yummy, free-range chickens, he’s sure to keep coming back…