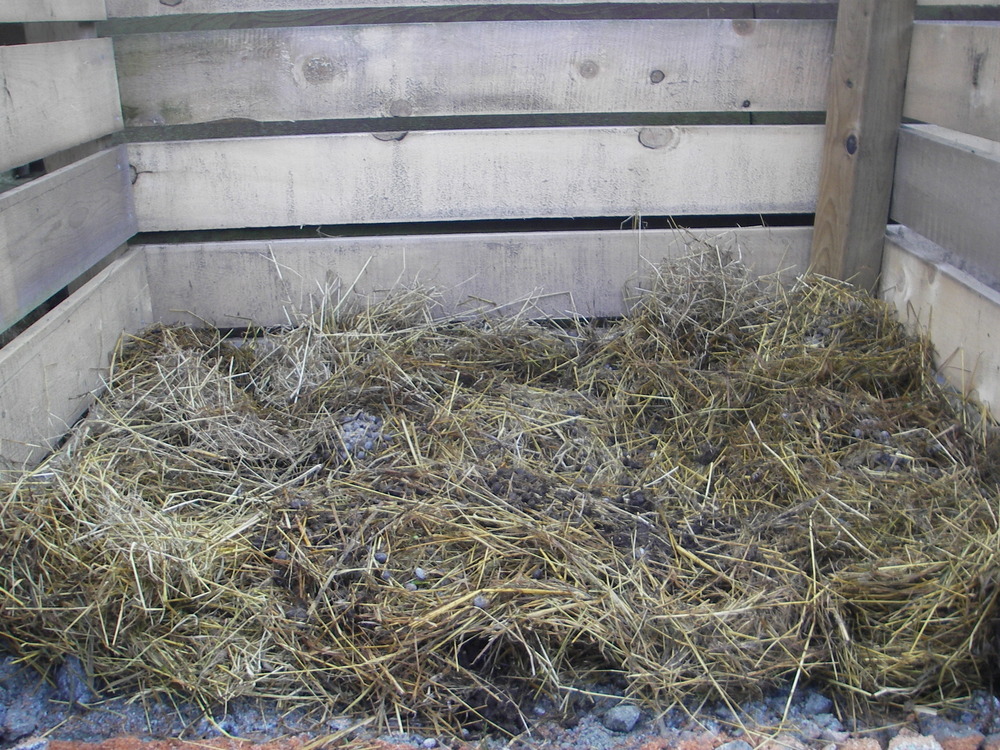 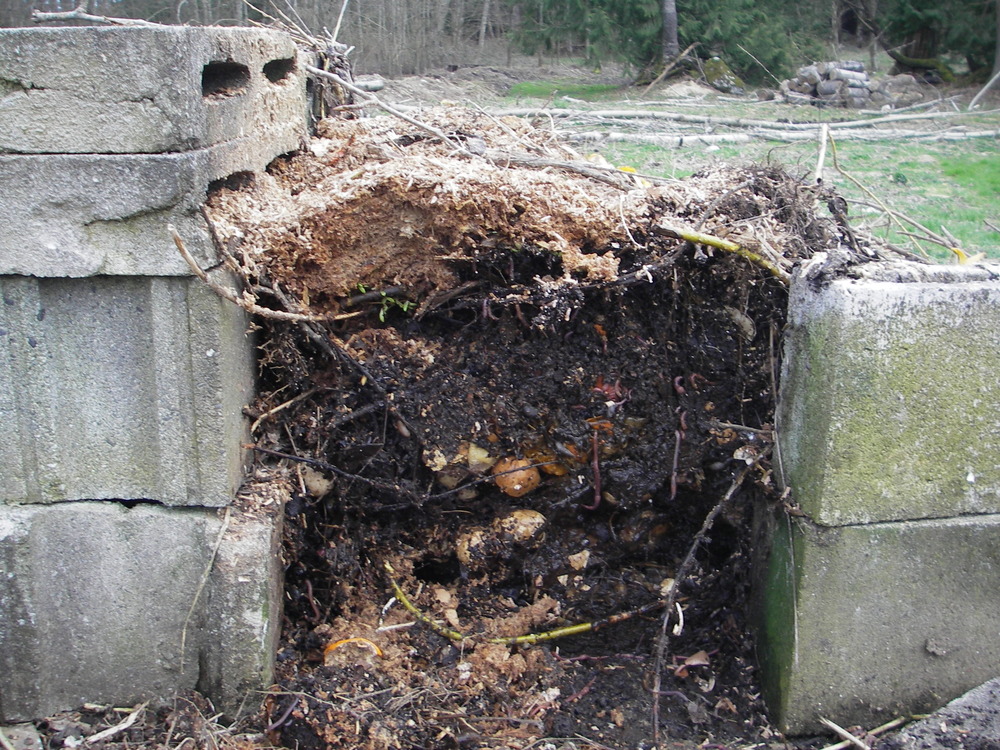 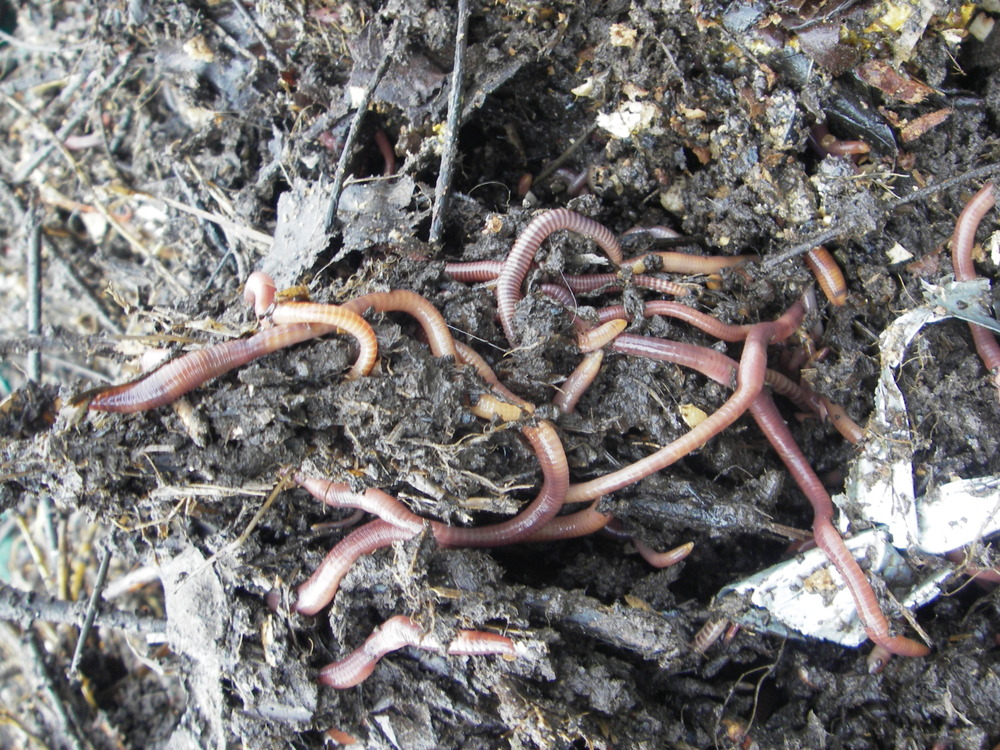 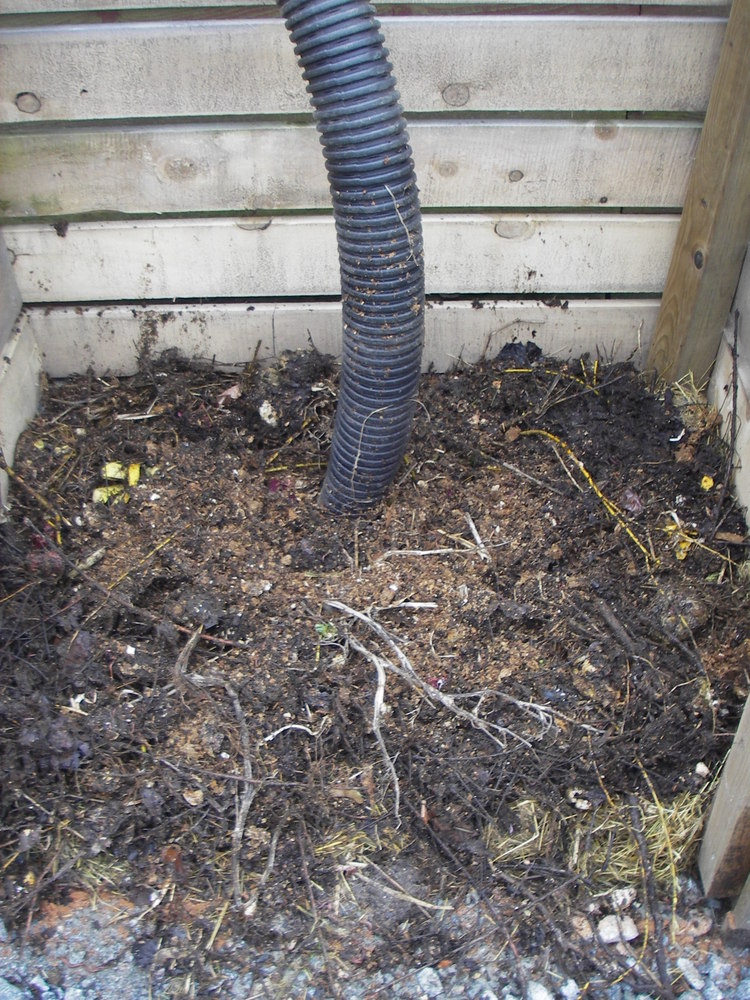 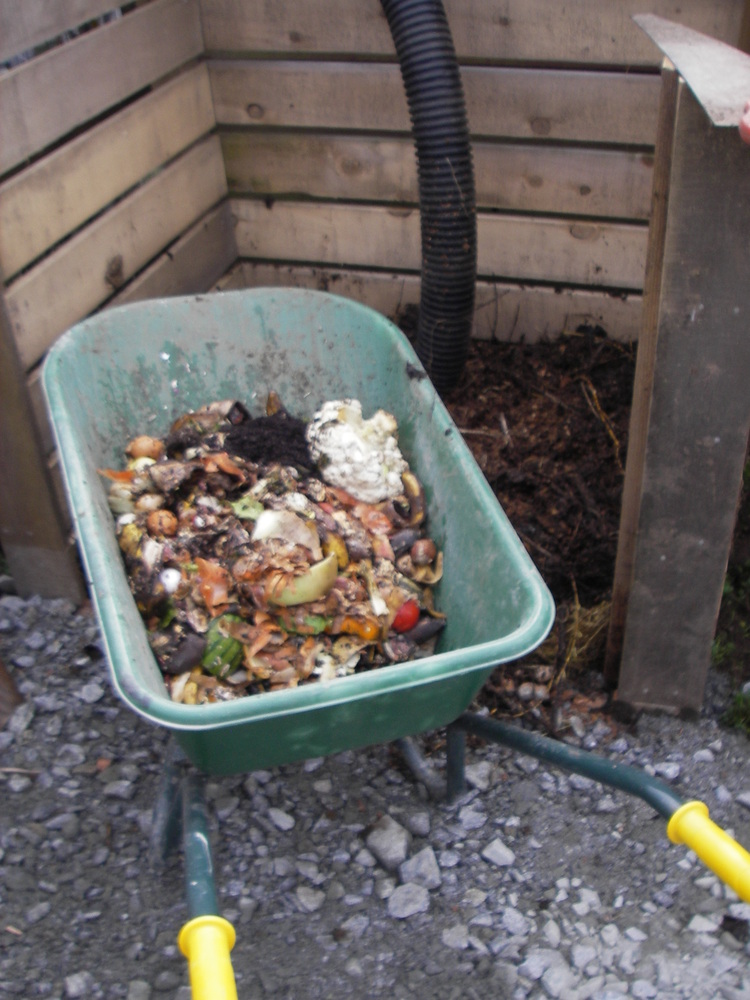 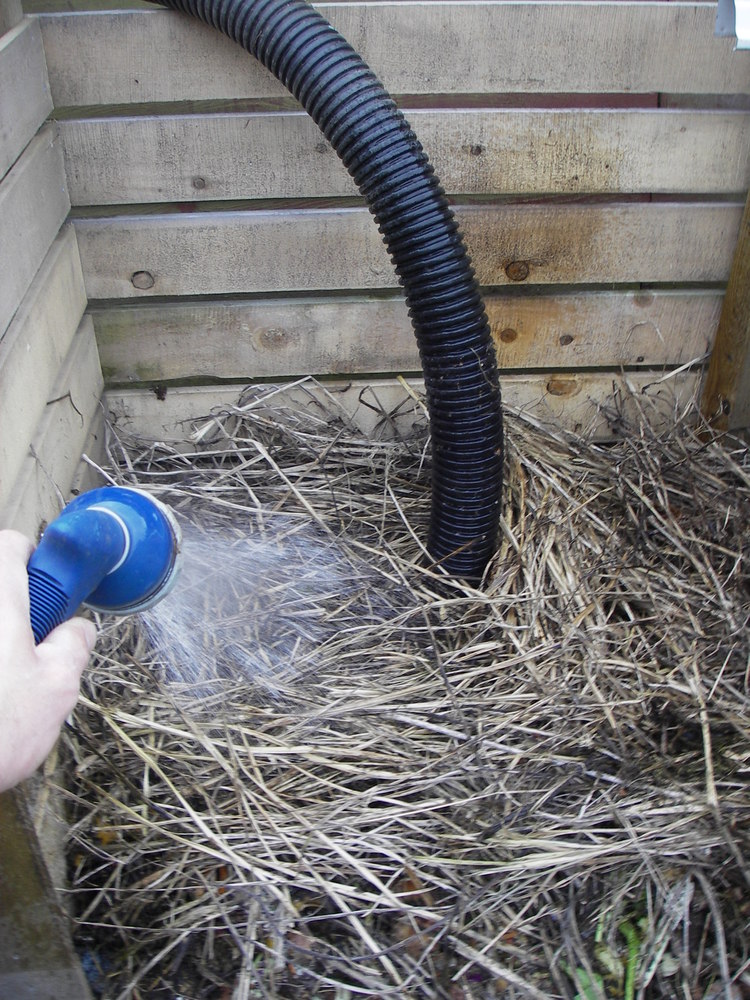 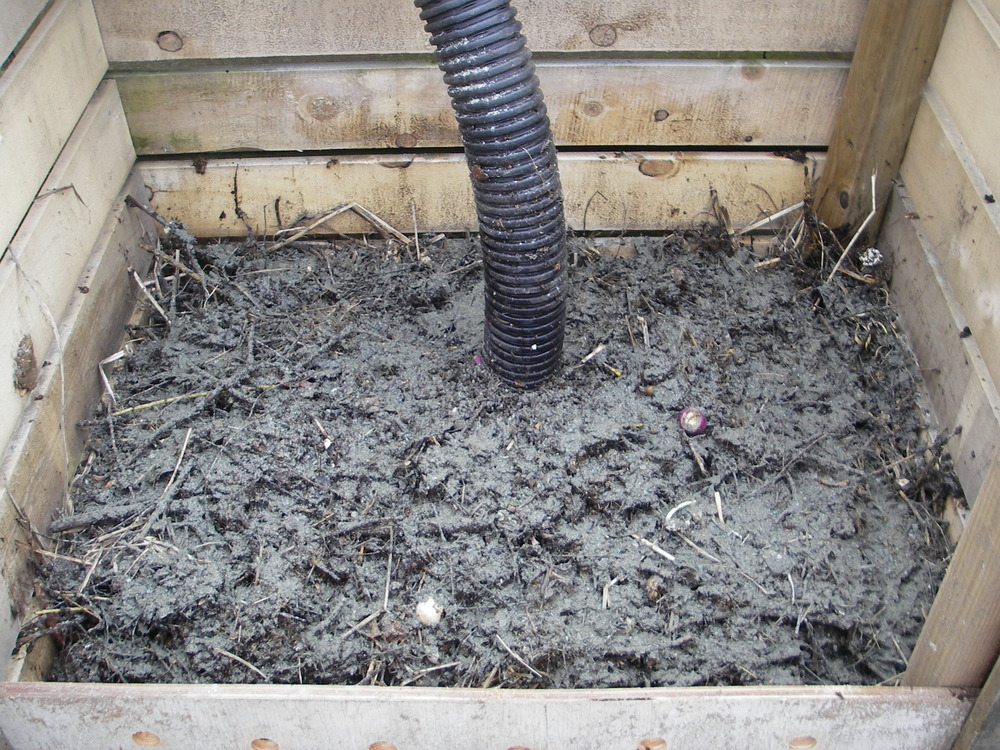 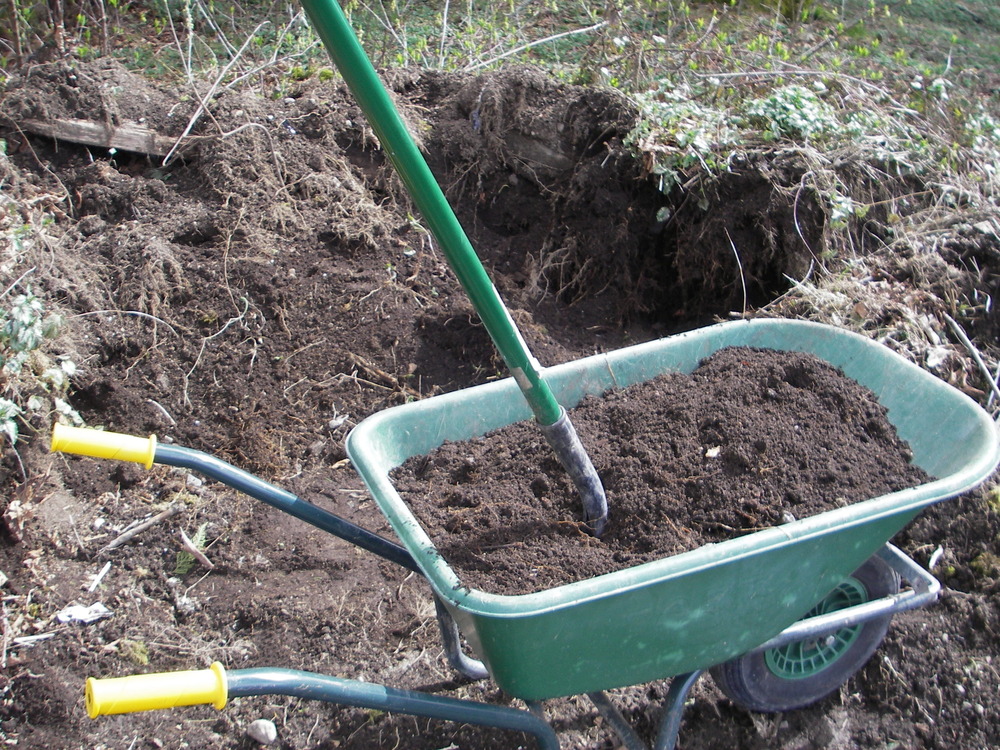 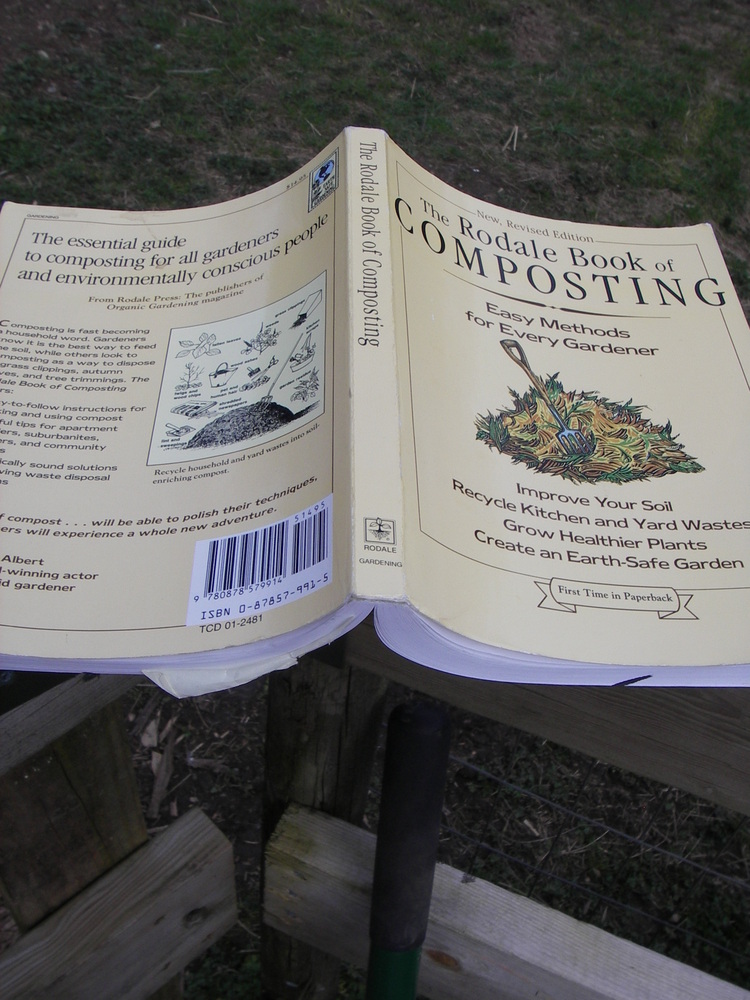 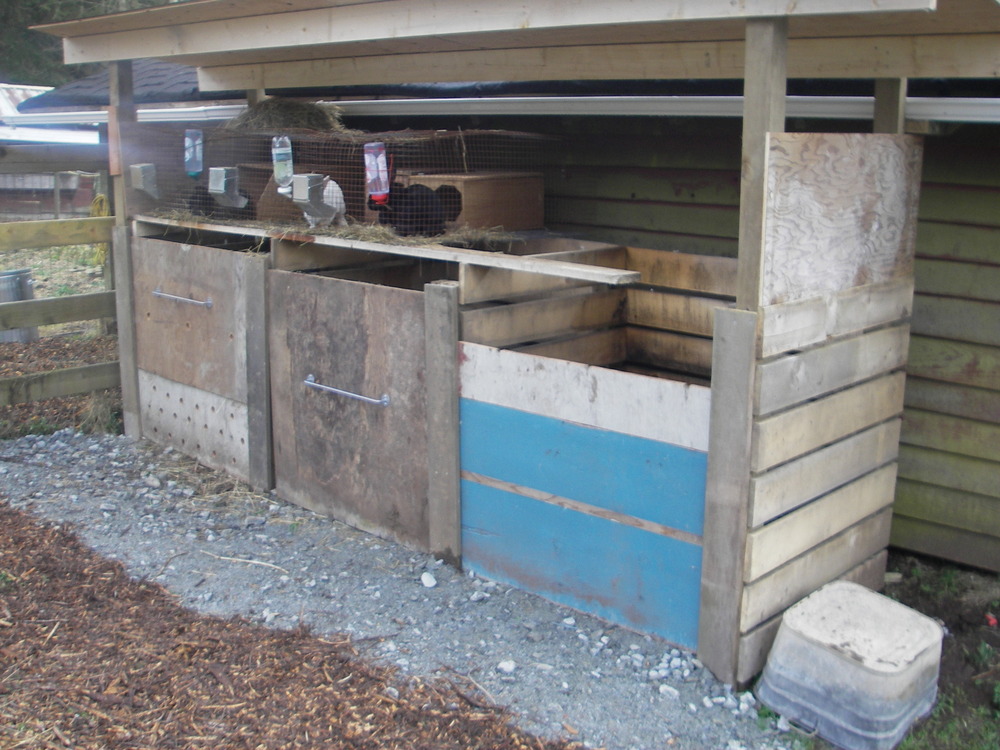 I am taking an ‘Organic Master Gardener’ course right now.  It’s great because some of my homework assignments are things we are doing or want to do around here already. One of these assignments is to build a compost, document it with pictures and provide a short writeup of the process. We had already built the bins but had not actually put anything in them yet so I already had a bit of a headstart. Anyways, for any of you interested in composting, my assignment is below. For those of you really really really interested in compost, I highly recommend The Rodale Book of Composting.

I have built a 3 bin compost system. As much as I would like to have the compost in contact with the soil, I sited it in such a low spot I felt I had to build it up with gravel to keep the bottom foot from being saturated in a standing pool of water throughout the winter.

The first layer I laid down was used rabbit bedding consisting of hay, rabbit manure and urine. I think this is a good ratio of carbon and nitrogen. Then I loaded up a wheelbarrow from my old compost which was compacted and completely saturated with water and, therefore anaerobic, which is not what we want. However, it does have a lot of organic matter in varying degrees of decomposition. It also has a ton of worms and other creepy crawly creatures as well as good bacteria and micro-organisms that I wanted to import into my new compost to help break down organic matter.  Next I took another wheelbarrow, approximately 10 gallons of food scraps we had saved up. Then I put a layer of dried comfrey stalks for carbon and sprayed it down with water. We had a pile of gravel (granite) and I sifted out a bucket of granite dust/sand and layered it over the comfrey stalks. Granite dust is a natural source of potash and contains important micronutrients which are released very slowly. Then I added another layer of my old compost. Finally, I added a layer of really great old (5-10years) composted soil that is full of effective microorganisms and nutrients that I want to inoculate my new pile with. I built all this around a piece of draintile pipe which will provide oxygen to the center of the pile. I also drilled holes in the front plywood so I can aerate the pile with an old pool cue.

We have now put our rabbits over the compost pile so they will continue to ‘rain their blessings’ down on it and I will continue to add food scraps and whatever else is available. I will also apply my effective microorganism spray when it is ready. In a month or so I will transfer the contents of this bin into the second bin and begin again. A month later I will transfer the contents from the second bin into the third bin and by this time next year I should have some very nice compost to put on the garden. . . at least in theory.  I guess we’ll see.

If anyone has compost/foodscraps you don’t know what to do with, you know where to bring it!